A molecular neuroethological approach for identifying and characterizing a cascade of behaviorally regulated genes. 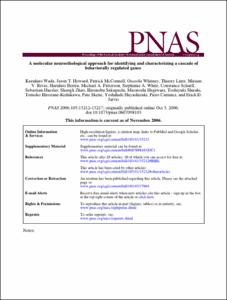 Associate Research Professor of Neurobiology
Extension of long axons is essential for the formation of connections in the developing nervous system, and for effective regeneration of pathways interrupted by traumatic injury, stroke, or other insults in the adult CNS. This laboratory is exploring how changes in genes expression during development alter the ability of neurons to support long axon extension, and the extent to which the re-activation of critical genes limits regeneration in the adult CNS. Global gene expression p
Alphabetical list of authors with Scholars@Duke profiles.