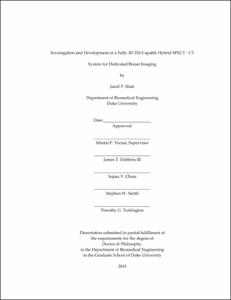 X-ray mammography has been the gold standard for breast imaging for decades, despite the significant limitations posed by the two dimensional (2D) image acquisitions. Difficulty in diagnosing lesions close to the chest wall and axilla, high amount of structural overlap and patient discomfort due to compression are only some of these limitations. To overcome these drawbacks, three dimensional (3D) breast imaging modalities have been developed including dual modality single photon emission computed tomography (SPECT) and computed tomography (CT) systems. This thesis focuses on the development and integration of the next generation of such a device for dedicated breast imaging. The goals of this dissertation work are to: [1] understand and characterize any effects of fully 3-D trajectories on reconstructed image scatter correction, absorbed dose and Hounsifeld Unit accuracy, and [2] design, develop and implement the fully flexible, third generation hybrid SPECT-CT system capable of traversing complex 3D orbits about a pendant breast volume, without interference from the other. Such a system would overcome artifacts resulting from incompletely sampled divergent cone beam imaging schemes and allow imaging closer to the chest wall, which other systems currently under research and development elsewhere cannot achieve.

The dependence of x-ray scatter radiation on object shape, size, material composition and the CT acquisition trajectory, was investigated with a well-established beam stop array (BSA) scatter correction method. While the 2D scatter to primary ratio (SPR) was the main metric used to characterize total system scatter, a new metric called ‘normalized scatter contribution’ was developed to compare the results of scatter correction on 3D reconstructed volumes. Scatter estimation studies were undertaken with a sinusoidal saddle (±15° polar tilt) orbit and a traditional circular (AZOR) orbit. Clinical studies to acquire data for scatter correction were used to evaluate the 2D SPR on a small set of patients scanned with the AZOR orbit. Clinical SPR results showed clear dependence of scatter on breast composition and glandular tissue distribution, otherwise consistent with the overall phantom-based size and density measurements. Additionally, SPR dependence was also observed on the acquisition trajectory where 2D scatter increased with an increase in the polar tilt angle of the system.

The dose delivered by any imaging system is of primary importance from the patient’s point of view, and therefore trajectory related differences in the dose distribution in a target volume were evaluated. Monte Carlo simulations as well as physical measurements using radiochromic film were undertaken using saddle and AZOR orbits. Results illustrated that both orbits deliver comparable dose to the target volume, and only slightly differ in distribution within the volume. Simulations and measurements showed similar results, and all measured dose values were within the standard screening mammography-specific, 6 mGy dose limit, which is used as a benchmark for dose comparisons.

Hounsfield Units (HU) are used clinically in differentiating tissue types in a reconstructed CT image, and therefore the HU accuracy of a system is very important, especially when using non-traditional trajectories. Uniform phantoms filled with various uniform density fluids were used to investigate differences in HU accuracy between saddle and AZOR orbits. Results illustrate the considerably better performance of the saddle orbit, especially close to the chest and nipple region of what would clinically be a pedant breast volume. The AZOR orbit causes shading artifacts near the nipple, due to insufficient sampling, rendering a major portion of the scanned phantom unusable, whereas the saddle orbit performs exceptionally well and provides a tighter distribution of HU values in reconstructed volumes.

Finally, the third generation, fully-suspended SPECT-CT system was designed in and developed in our lab. A novel mechanical method using a linear motor was developed for tilting the CT system. A new x-ray source and a custom made 40 x 30 cm2 detector were integrated on to this system. The SPECT system was nested, in the center of the gantry, orthogonal to the CT source-detector pair. The SPECT system tilts on a goniometer, and the newly developed CT tilting mechanism allows ±15° maximum polar tilting of the CT system. The entire gantry is mounted on a rotation stage, allowing complex arbitrary trajectories for each system, without interference from the other, while having a common field of view. This hybrid system shows potential to be used clinically as a diagnostic tool for dedicated breast imaging.