Clonal Studies of Human B Cells 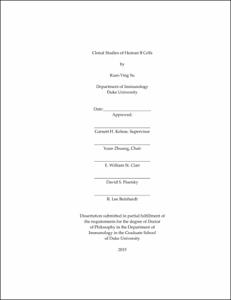 B lymphocytes are multifunctional and play important roles in both innate and adaptive immunity. The diverse roles of B cells can be attributed to the various and distinct types of B cells as determined by their origin, developmental stage, antigen specificity, and function.

Evidence suggests that human innate-like B cells (i.e., marginal zone and/or B1-like B cells) develop during fetal life. However, the characteristics of human fetal B-lineage cells are less understood. Recent studies of fetal and human umbilical cord B cells indicated that CD27, a well-established marker of human memory B cells, may also be expressed on human B1-like B cells. Indeed, CD27+ B cells are present in patients with hyper-IgM 1 (HIGM1) syndrome who are unable to generate GCs or memory B cells. In order to define the origin of naïve CD27+IgD+ human B cells, I studied B-cell development in both fetal and adult tissues.

In human fetal liver, most CD19+ cells co-express CD10, a marker of human developing B cells. Some CD19+CD10+ B cells express CD27, and these fetal CD27+ cells are present in the pro-B, pre-B, and immature/transitional B-cell compartments. Lower frequencies of phenotypically identical cells are also identified in adult bone marrow. CD27+ pro-B, pre-B, and immature/transitional B cells express recombination activating gene-1, terminal deoxynucleotidyl transferase, and Vpre-B mRNA comparable to their CD27− counterparts. CD27+ and CD27− developing B cells show similar immunoglobulin heavy chain gene usage with low levels of mutations, suggesting that CD27+ developing B cells are distinct from mutated memory B cells. Despite these similarities, CD27+ developing B cells differ from CD27− developing B cells by their increased expression of LIN28B, a transcription factor associated with the fetal lymphoid lineages of mice. Furthermore, CD27+ pro-B cells efficiently generate IgM+IgD+ immature/transitional B cells in vitro. Our observations suggest that CD27 expression during B-cell development identifies a physiologic state or lineage for human B-cell development distinct from the memory B-cell compartment.

Regarding B-cell repertoire, due to the random recombination of immunoglobulin V, D, and J gene segments during B-cell development, B cells are highly diversified in their antigen specificity. Through their specific B-cell antigen receptors (BCRs), B cells recognize foreign (and self-) antigens, and present these antigens to cognate T cells to elicit/establish humoral responses, such as germinal centers, immunological memory, and long-lasting circulating antibodies. Some bacteria and viruses escape the host’s immune system by mimicking host antigens, as B cells that recognize shared epitopes on self- and foreign antigens may provide protection against such pathogens; however, these B cells are normally eliminated by tolerance mechanisms during development. The extent of tolerization manifest among human B cells that recognize both self- and foreign antigens is unknown. Here, I and my colleagues use an efficient single B-cell culture method and multiplexed antigen-binding assays to determine the specificity of about 2,300 clonal IgG antibodies produced by the progeny of single transitional and mature B cells. We show that in healthy individuals, half of the self-reactive B cells crossreact with foreign antigen, and that the frequencies of crossreactive B cells decrease by half between the transitional and mature B-cell stages, indicating that a substantial fraction of foreign specificities is lost by the second tolerance mechanisms. In SLE patients, who show defective peripheral tolerance, frequencies of crossreactive B cells are unchanged between the B-cell stages. The crossreactive, mature B cells in SLE patients show distinct reactivity to foreign antigens. We propose that activating forbidden B cells may be a good strategy for protection against host-mimicking pathogens if we can control tolerance.

Activated B cells can present antigen to T cells, as well as differentiate into memory B cells and plasma cells. Indeed, activated B cells express high levels of MHCII and are considered to be professional antigen presenting cells (APC), along with dendritic cells and macrophages. APC can be used to discover the epitopes targeted in T-cell responses; T cells are co-cultured with autologous APC in the presence of antigens and T-cell responses are evaluated. With numerous epitope candidates, mapping T-cell epitopes requires large numbers of APC; the availability of APC in blood is a limiting component and leukapheresis is often required. Since B cells can be expanded in vitro more easily than other APC, they represent a solution for the challenge of isolating adequate numbers of APC from blood in order to determine T-cell antigen specificity. I modified our single B-cell culture to support efficient activation and proliferation of both naïve and memory human B cells for the purpose of generating large numbers of autologous APC. Briefly, naïve or memory B cells recovered from blood are cultured with recombinant human IL-2, IL-4, IL-21, and BAFF on CD154+ feeder cells; this culture supports extensive B-cell proliferation, with approximately 103 fold increases following 8 days in culture, and 106 fold increases when cultures are split and cultured for 8 more days. The capacity for continued proliferation is stable for at least another week. In culture, a significant fraction of naïve B cells undergo isotype switching and terminally differentiate into plasmacytes. Culture-derived (CD) B cells are readily cryopreserved, and when recovered, retain their ability to proliferate and differentiate. Significantly, proliferating CD B cells express high levels of MHCII, CD80, and CD86. I have examined the APC function of CD B cells and found that they present both allo- and microbial antigens to autologous T cells with comparable efficiency to PBMC. Moreover, I am able to activate and expand antigen-specific memory B cells; these cultured cells are highly effective in presenting antigen to T cells. This culture method provides a platform for studying the BCR and TCR repertoires within a single individual.