Characterising phase variations in MALDI-TOF data and correcting them by peak alignment. 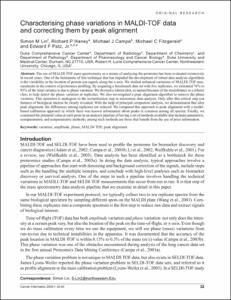 View / Download
1.7 Mb
Date
Authors
Lin, Simon M
Haney, Richard P
Campa, Michael J
Fitzgerald, Michael C
Patz, Edward F
Repository Usage Stats
165
views
206
downloads
Abstract
The use of MALDI-TOF mass spectrometry as a means of analyzing the proteome has been evaluated extensively in recent years. One of the limitations of this technique that has impeded the development of robust data analysis algorithms is the variability in the location of protein ion signals along the x-axis. We studied technical variations of MALDI-TOF measurements in the context of proteomics profiling. By acquiring a benchmark data set with five replicates, we estimated 76% to 85% of the total variance is due to phase variation. We devised a lobster plot, so named because of the resemblance to a lobster claw, to help detect the phase variation in replicates. We also investigated a peak alignment algorithm to remove the phase variation. This operation is analogous to the normalization step in microarray data analysis. Only after this critical step can features of biological interest be clearly revealed. With the help of principal component analysis, we demonstrated that after peak alignment, the differences among replicates are reduced. We compared this approach to peak alignment with a model-based calibration approach in which there was known information about peaks in common among all spectra. Finally, we examined the potential value at each point in an analysis pipeline of having a set of methods available that includes parametric, semiparametric and nonparametric methods; among such methods are those that benefit from the use of prior information.
Type
Journal article
Subject
MALDI-TOF
amplitude
peak alignment
phase
variation
Permalink
https://hdl.handle.net/10161/11570
Collections
More Info
Show full item record Associate Professor in Radiology
There is longstanding evidence that invasive lung cancer is the end result of a multi-step process in which progressive molecular changes herald and accompany cytomorphologic changes. Our knowledge of these molecular events and the specific markers associated with the evolution from initiation to invasion is only partial. A number of specific biomarkers involved in oncogene activation or inactivation of tumor suppressor genes have been identified, but no single marker to date has been shown to h