Empirical measurement of illicit tobacco trade in the Philippines. 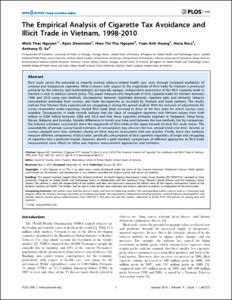 View / Download
141.3 Kb
Date
Authors
Abola, Victor
Sy, Deborah
Denniston, Ryan
So, Anthony
Repository Usage Stats
121
views
397
downloads
Abstract
Cigarette smuggling reduces the price of cigarettes, thwarts youth access restrictions, reduces government revenue, and undercuts the ability of taxes to reduce consumption. The tobacco industry often opposes increases to tobacco taxes on the claim that greater taxes induce more smuggling. To date, little is known about the magnitude of smuggling in the Philippines. his information is necessary to effectively address illicit trade and to measure the impacts of tax changes and the introduction of secure tax markings on illicit trade. This study employs two gap discrepancy methods to estimate the magnitude of illicit trade in cigarettes for the Philippines between 1994 and 2009. First, domestic consumption is compared with tax-paid sales to measure the consumption of illicit cigarettes. Second, imports recorded by the Philippines are compared with exports to the Philippines by trade partners to measure smuggling. Domestic consumption fell short of tax-paid sales for all survey years. The magnitude of these differences and a comparison with a prevalence survey for 2009 suggest a high level of survey under-reporting of smoking. In the late 1990s and the mid 2000s, the Philippines experienced two sharp declines in trade discrepancies, from a high of $750 million in 1995 to a low of $133.7 million in 2008. Discrepancies composed more than one-third of the domestic market in 1995, but only 10 percent in 2009. Hong Kong, Singapore, and China together account for more than 80 percent of the cumulative discrepancies over the period and 74 percent of the discrepancy in 2009. The presence of large discrepancies supports the need to implement an effective tax marking and tobacco track and trace system to reduce illicit trade and support tax collection. The absence of a relation between tax changes and smuggling suggests that potential increases in the excise tax should not be discouraged by illicit trade. Finally, the identification of specific trade partners as primary sources for illicit trade may facilitate targeted efforts in cooperation with these governments to reduce illicit trade.
Type
Journal article
Subject
illicit trade
tax evasion
tobacco
Permalink
https://hdl.handle.net/10161/11601
Collections
More Info
Show full item record