Hair cortisol as a biomarker of stress in mindfulness training for smokers. 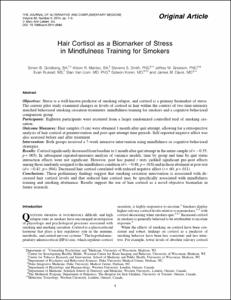 Associate Professor of Medicine
Dr. James Davis is a practicing physician of Internal Medicine, and serves as the Medical Director for Duke Center for Smoking Cessation, Director of the Duke Smoking Cessation Program and Co-Director of the Duke-UNC Tobacco Treatment Specialist Credentialing Program.  His research focuses on development of new pharmaceutical treatments for smoking cessation.  He is principal investigator on several trials including a study on &ldquo;adaptive&rdquo; smoking cessation and several trials