Composition and topographic organization of signals sent from the frontal eye field to the superior colliculus. 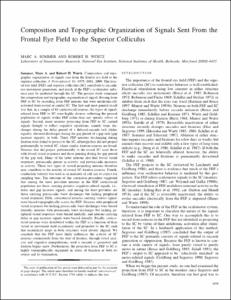 View / Download
2.6 Mb
Date
Authors
Sommer, MA
Wurtz, RH
Repository Usage Stats
153
views
164
downloads
Abstract
The frontal eye field (FEF) and superior colliculus (SC) contribute to saccadic eye movement generation, and much of the FEF's oculomotor influence may be mediated through the SC. The present study examined the composition and topographic organization of signals flowing from FEF to SC by recording from FEF neurons that were antidromically activated from rostral or caudal SC. The first and most general result was that, in a sample of 88 corticotectal neurons, the types of signals relayed from FEF to SC were highly diverse, reflecting the general population of signals within FEF rather than any specific subset of signals. Second, many neurons projecting from FEF to SC carried signals thought to reflect cognitive operations, namely tonic discharges during the delay period of a delayed-saccade task (delay signals), elevated discharges during the gap period of a gap task (gap increase signals), or both. Third, FEF neurons discharging during fixation were found to project to the SC, although they did not project preferentially to rostral SC, where similar fixation neurons are found. Neurons that did project preferentially to the rostral SC were those with foveal visual responses and those pausing during the gap period of the gap task. Many of the latter neurons also had foveal visual responses, presaccadic pauses in activity, and postsaccadic increases in activity. These two types of rostral-projecting neurons therefore may contribute to the activity of rostral SC fixation neurons. Fourth, conduction velocity was used as an indicator of cell size to correct for sampling bias. The outcome of this correction procedure suggested that among the most prevalent neurons in the FEF corticotectal population are those carrying putative cognitive-related signals, i.e., delay and gap increase signals, and among the least prevalent are those carrying presaccadic burst discharges but lacking peripheral visual responses. Fifth, corticotectal neurons carrying various signals were biased topographically across the FEF. Neurons with peripheral visual responses but lacking presaccadic burst discharges were biased laterally, neurons with presaccadic burst discharges but lacking peripheral visual responses were biased medially, and neurons carrying delay or gap increase signals were biased dorsally. Finally, corticotectal neurons were distributed within the FEF as a function of their visual or movement field eccentricity and projected to the SC such that eccentricity maps in both structures were closely aligned. We conclude that the FEF most likely influences the activity of SC neurons continuously from the start of fixation, through visual analysis and cognitive manipulations, until a saccade is generated and fixation begins anew. Furthermore, the projection from FEF to SC is highly topographically organized in terms of function at both its source and its termination.
Type
Journal article
Subject
Animals
Axons
Brain Mapping
Electric Stimulation
Fixation, Ocular
Fovea Centralis
Frontal Lobe
Macaca mulatta
Motor Neurons
Neural Conduction
Neurons, Afferent
Reaction Time
Saccades
Superior Colliculi
Visual Fields
Visual Pathways
Permalink
https://hdl.handle.net/10161/11753
Collections
More Info
Show full item record