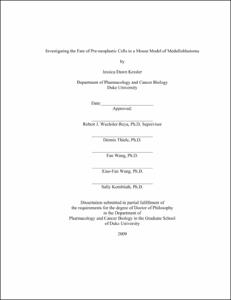 Studying the early stages of cancer can provide important insight into the molecular basis of the disease. In many human cancers, such as prostate, pancreatic, and colon cancer, a pre-neoplastic, or intermediate, stage of the disease has been identified. The pre-neoplastic stage is presumed to be a transition during which normal cells undergo malignant transformation. However, the link between the pre-neoplastic cells and end-stage disease has never been formally established. To investigate the fate of such cells, the patched (ptc) mutant mouse, a model for the brain tumor medulloblastoma was used. Pre-neoplastic cells (PNCs) are found in most ptc mutants during early adulthood, but only 15% of these animals develop tumors. Although PNCs are found in mice that develop tumors, the ability of PNCs to give rise to tumors has never been demonstrated directly, and the fate of cells that do not form tumors remains unknown. Genetic fate mapping and orthotopic transplantation provided definitive evidence that PNCs give rise to tumors and showed that the predominant fate of PNCs that do not form tumors is differentiation. Moreover, N-myc, a gene commonly amplified in medulloblastoma, can dramatically alter the fate of PNCs, preventing differentiation and driving progression to tumors. Importantly, N-myc allows PNCs to grow independently of hedgehog signaling, making the resulting tumors resistant to hedgehog antagonists. These studies provide the first direct evidence that PNCs can give rise to tumors, and demonstrate that identification of genetic changes that promote tumor progression is critical for designing effective therapies for cancer.