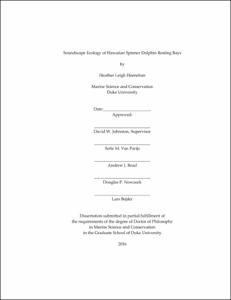 Sound is a key sensory modality for Hawaiian spinner dolphins. Like many other marine animals, these dolphins rely on sound and their acoustic environment for many aspects of their daily lives, making it is essential to understand soundscape in areas that are critical to their survival. Hawaiian spinner dolphins rest during the day in shallow coastal areas and forage offshore at night. In my dissertation I focus on the soundscape of the bays where Hawaiian spinner dolphins rest taking a soundscape ecology approach. I primarily relied on passive acoustic monitoring using four DSG-Ocean acoustic loggers in four Hawaiian spinner dolphin resting bays on the Kona Coast of Hawai‛i Island. 30-second recordings were made every four minutes in each of the bays for 20 to 27 months between January 8, 2011 and March 30, 2013. I also utilized concomitant vessel-based visual surveys in the four bays to provide context for these recordings. In my first chapter I used the contributions of the dolphins to the soundscape to monitor presence in the bays and found the degree of presence varied greatly from less than 40% to nearly 90% of days monitored with dolphins present. Having established these bays as important to the animals, in my second chapter I explored the many components of their resting bay soundscape and evaluated the influence of natural and human events on the soundscape. I characterized the overall soundscape in each of the four bays, used the tsunami event of March 2011 to approximate a natural soundscape and identified all loud daytime outliers. Overall, sound levels were consistently louder at night and quieter during the daytime due to the sounds from snapping shrimp. In fact, peak Hawaiian spinner dolphin resting time co-occurs with the quietest part of the day. However, I also found that humans drastically alter this daytime soundscape with sound from offshore aquaculture, vessel sound and military mid-frequency active sonar. During one recorded mid-frequency active sonar event in August 2011, sound pressure levels in the 3.15 kHz 1/3rd-octave band were as high as 45.8 dB above median ambient noise levels. Human activity both inside (vessels) and outside (sonar and aquaculture) the bays significantly altered the resting bay soundscape. Inside the bays there are high levels of human activity including vessel-based tourism directly targeting the dolphins. The interactions between humans and dolphins in their resting bays are of concern; therefore, my third chapter aimed to assess the acoustic response of the dolphins to human activity. Using days where acoustic recordings overlapped with visual surveys I found the greatest response in a bay with dolphin-centric activities, not in the bay with the most vessel activity, indicating that it is not the magnitude that elicits a response but the focus of the activity. In my fourth chapter I summarize the key results from my first three chapters to illustrate the power of multiple site design to prioritize action to protect Hawaiian spinner dolphins in their resting bays, a chapter I hope will be useful for managers should they take further action to protect the dolphins.