Grabbing Your Attention: The Impact of Finding a First Target in Multiple-Target Search 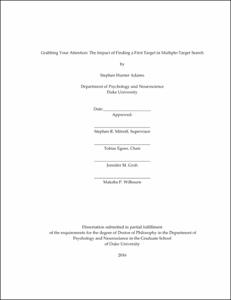 For over 50 years, the Satisfaction of Search effect, and more recently known as the Subsequent Search Miss (SSM) effect, has plagued the field of radiology. Defined as a decrease in additional target accuracy after detecting a prior target in a visual search, SSM errors are known to underlie both real-world search errors (e.g., a radiologist is more likely to miss a tumor if a different tumor was previously detected) and more simplified, lab-based search errors (e.g., an observer is more likely to miss a target ‘T’ if a different target ‘T’ was previously detected). Unfortunately, little was known about this phenomenon’s cognitive underpinnings and SSM errors have proven difficult to eliminate. However, more recently, experimental research has provided evidence for three different theories of SSM errors: the Satisfaction account, the Perceptual Set account, and the Resource Depletion account. A series of studies examined performance in a multiple-target visual search and aimed to provide support for the Resource Depletion account—a first target consumes cognitive resources leaving less available to process additional targets.

To assess a potential mechanism underlying SSM errors, eye movements were recorded in a multiple-target visual search and were used to explore whether a first target may result in an immediate decrease in second-target accuracy, which is known as an attentional blink. To determine whether other known attentional distractions amplified the effects of finding a first target has on second-target detection, distractors within the immediate vicinity of the targets (i.e., clutter) were measured and compared to accuracy for a second target. To better understand which characteristics of attention were impacted by detecting a first target, individual differences within four characteristics of attention were compared to second-target misses in a multiple-target visual search.

The results demonstrated that an attentional blink underlies SSM errors with a decrease in second-target accuracy from 135ms-405ms after detection or re-fixating a first target. The effects of clutter were exacerbated after finding a first target causing a greater decrease in second-target accuracy as clutter increased around a second-target. The attentional characteristics of modulation and vigilance were correlated with second- target misses and suggest that worse attentional modulation and vigilance are predictive of more second-target misses. Taken together, these result are used as the foundation to support a new theory of SSM errors, the Flux Capacitor theory. The Flux Capacitor theory predicts that once a target is found, it is maintained as an attentional template in working memory, which consumes attentional resources that could otherwise be used to detect additional targets. This theory not only proposes why attentional resources are consumed by a first target, but encompasses the research in support of all three SSM theories in an effort to establish a grand, unified theory of SSM errors.