Health Knowledge, Attitudes, and Practices among Street Children in LMICs 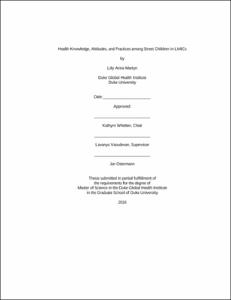 Background: Worldwide, it is estimated that there are up to 150 million street children. Street children are an understudied, vulnerable population. While many studies have characterized street children’s physical health, few have addressed the circumstances and barriers to their utilization of health services.

Methods: A systematic literature review was conducted to understand the barriers and facilitators that street children face when accessing healthcare in low and middle income countries. Six databases were used to search for peer review literature and one database and Google Search engine were used to find grey literature (theses, dissertations, reports, etc.). There were no exclusions based on study design. Studies were eligible for inclusion if the study population included street children, the study location was a low and middle income country defined by the World Bank, AND whose subject pertained to healthcare.

In addition, a cross-sectional study was conducted between May 2015 and August 2015 with the goal of understanding knowledge, attitudes, and health seeking practices of street children residing in Battambang, Cambodia. Time location and purposive sampling were used to recruit community (control) and street children. Both boys and girls between the ages of 10 and 18 were recruited. Data was collected through a verbally administered survey. The knowledge, attitudes and health seeking practices of community and street children were compared to determine potential differences in healthcare utilization.

Results: Of the 2933 abstracts screened for inclusion in the systematic literature review, eleven articles met all the inclusion criteria and were found to be relevant. Cost and perceived stigma appeared to be the largest barriers street children faced when attempting to seek care. Street children preferred to receive care from a hospital. However, negative experiences and mistreatment by health providers deterred children from going there. Instead, street children would often self treat and/or purchase medicine from a pharmacy or drug vendor. Family and peer support were found to be important for facilitating treatment.