The Role of Pre- and Postconception Relationships for First-Time Parents 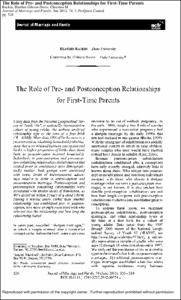 View / Download
2.3 Mb
Date
Authors
Rackin, H
Gibson Davis, CM
Repository Usage Stats
95
views
166
downloads
Abstract
Using data from the National Longitudinal Survey of Youth 1997, a nationally representative cohort of young adults, the authors analyzed relationship type at the time of a first birth (N = 4,044). More than 10% of births were to a postconception cohabiting household (cohabitations that were initiated between conception and birth), a higher proportion of births than those born to postconception married households. Individuals in postconception and preconception cohabiting relationships (cohabitations that existed prior to conception) were demographically similar; both groups were associated with lower levels of socioeconomic advantage relative to those in preconception and postconception marriage. Postconception and preconception cohabiting relationships were associated with similar levels of dissolution, as 40% dissolved within 3 years of a child's birth. Having a marital union, rather than whether relationship was established pre- or postconception, was more strongly associated with who selected into the relationship and how long the relationship lasted. © National Council on Family Relations, 2012.
Type
Journal article
Permalink
https://hdl.handle.net/10161/12436
Published Version (Please cite this version)
10.1111/j.1741-3737.2012.00974.x
Publication Info
Rackin, H; & Gibson Davis, CM (2012). The Role of Pre- and Postconception Relationships for First-Time Parents. Journal of Marriage and Family, 74(3). pp. 526-539. 10.1111/j.1741-3737.2012.00974.x. Retrieved from https://hdl.handle.net/10161/12436.
This is constructed from limited available data and may be imprecise. To cite this article, please review & use the official citation provided by the journal.
Collections
More Info
Show full item record