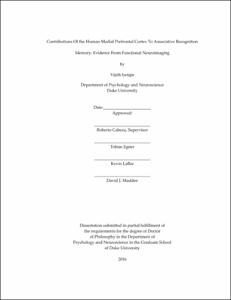 Neuroimaging studies of episodic memory, or memory of events from our personal past, have predominantly focused their attention on medial temporal lobe (MTL). There is growing acknowledgement however, from the cognitive neuroscience of memory literature, that regions outside the MTL can support episodic memory processes. The medial prefrontal cortex is one such region garnering increasing interest from researchers. Using behavioral and functional magnetic resonance imaging measures, over two studies, this thesis provides evidence of a mnemonic role of the medial PFC. In the first study, participants were scanned while judging the extent to which they agreed or disagreed with the sociopolitical views of unfamiliar individuals. Behavioral tests of associative recognition revealed that participants remembered with high confidence viewpoints previously linked with judgments of strong agreement/disagreement. Neurally, the medial PFC mediated the interaction between high-confidence associative recognition memory and beliefs associated with strong agree/disagree judgments. In an effort to generalize this finding to well-established associative information, in the second study, we investigated associative recognition memory for real-world concepts. Object-scene pairs congruent or incongruent with a preexisting schema were presented to participants in a cued-recall paradigm. Behavioral tests of conceptual and perceptual recognition revealed memory enhancements arising from strong resonance between presented pairs and preexisting schemas. Neurally, the medial PFC tracked increases in visual recall of schema-congruent pairs whereas the MTL tracked increases in visual recall of schema-incongruent pairs. Additionally, ventral areas of the medial PFC tracked conceptual components of visual recall specifically for schema-congruent pairs. These findings are consistent with a recent theoretical proposal of medial PFC contributions to memory for schema-related content. Collectively, these studies provide evidence of a role for the medial PFC in associative recognition memory persisting for associative information deployed in our daily social interactions and for those associations formed over multiple learning episodes. Additionally, this set of findings advance our understanding of the cognitive contributions of the medial PFC beyond its canonical role in processes underlying social cognition.