A Philosophy of Operatic Storytelling 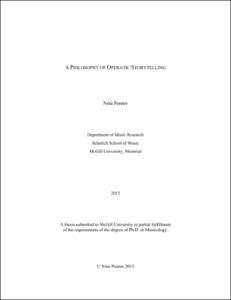 View / Download
9.4 Mb
Date
Author
Penner, N
Repository Usage Stats
509
views
1,797
downloads
Abstract
This dissertation presents the first theoretical model for understanding narration and point of view in opera, examining repertoire from Richard Wagner to Benjamin Britten. Prior music scholarship on musical narratives and narrativity has drawn primarily on continental literary theory and philosophy of the 1960s to the middle of the 1980s. This study, by contrast, engages with current debates in the analytic branch of aesthetic philosophy. One reason why the concept of point of view has not been more extensively explored in opera studies is the widespread belief that operas are not narratives. This study questions key premises on which this assumption rests. In so doing, it presents a new definition of narrative. Arguably, a narrative is an utterance intended to communicate a story, where "story" is understood to involve the representation of a particular agent or agents exercising their agency. This study explores the role of narrators in opera, introducing the first taxonomy of explicit fictional operatic narrators. Through a close analysis of Britten and Myfanwy Piper's Owen Wingrave, it offers an explanation of music's power to orient spectators to the points of view of opera characters by providing audiences with access to characters' perceptual experiences and cognitive, affective, and psychological states. My analysis also helps account for how our subjective access to fictional characters may engender sympathy for them. The second half of the dissertation focuses on opera in performance. Current thinking in music scholarship predominantly holds that fidelity is an outmoded concern. I argue that performing a work-for-performance is a matter of intentionally modelling one's performance on the work-for-performance's features and achieving a moderate degree of fidelity or matching between the two. Finally, this study investigates how the creative decisions of the performers and director impact the point of view from which an opera is told.
Type
Other article
Subject
opera performance
opera staging
narrative
narration
point of view
work ontology
intentions
analytic philosophy
Benjamin Britten
Richard Wagner
Peter Sellars
Permalink
https://hdl.handle.net/10161/12942
Citation
Penner, N (2016). A Philosophy of Operatic Storytelling. Retrieved from https://hdl.handle.net/10161/12942.
Collections
More Info
Show full item record

Research Associate
Nina Penner is a musicologist who is at Duke for two-year postdoc, funded by the Social Sciences and Humanities Research Council of Canada. Her work lies at the intersection of opera studies, analytic philosophy, and literary theory. Her first book A Philosophy of Operatic Storytelling (under contract with Indiana University Press's Musical Meaning and Interpretation Series) theorizes how opera tells stories in comparison with other media. Her next book project will be on