The Qur'an after Babel: Translating and Printing the Qur'an in Late Ottoman and Modern Turkey 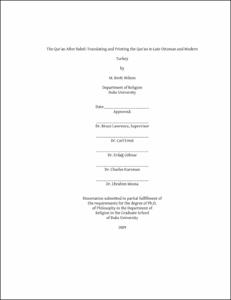 This dissertation examines the translation and printing of the Qur'an in the late Ottoman Empire and the early years of the Republic of Turkey (1820-1938). As most Islamic scholars deem the Qur'an inimitable divine speech, the idea of translating the Qur'an has been surrounded with concern since the first centuries of Islam; printing aroused fears about ritual purity and threatened the traditional trade of the scribes. This study examines how Turkish Muslims challenged these concerns and asserted the necessity to print and translate the Qur'an in order to make the text more accessible.

With the spread of the printing press and literacy in the nineteenth and twentieth centuries, Qur'an translations have become increasingly important as means of transmitting the meaning of the text to expanding audiences. I investigate the rise of Qur'an translation through a historical survey of Ottoman and Turkish language translations and an examination of the debates surrounding them waged in periodicals, government archives, and monographs. While Turkish translations have often been construed as a product of nationalism, I argue that the rise of translation began with a renewed emphasis on the Qur'anic theme of intelligibility bolstered by the availability of printed books, the spread of state schools, and increased knowledge of European history and intellectual currents. Turkish nationalists later adopted and advocated the issue, reconstruing the "Turkish Qur'an" as a nationalist symbol.

Over the course of the nineteenth and twentieth centuries, the meaning of Qur'an translation itself has changed and incorporated a variety of new concerns. Asserting translation of the Qur'an in the late Ottoman Empire became synecdoche for a new vision of Muslim authority and modernity that reduced the role of the ulama and created space for interpretive plurality on an unprecedented scale. Meanwhile, some Turkish intellectuals came to appreciate the symbolic value of Turkish renderings for the assertion of national identity in the Islamic sphere. While the notion of translation as replacement has withered, in practice, translations have come to play a robust role in Turkish Muslim life as supplement and counterpoint to the Qur'anic text.