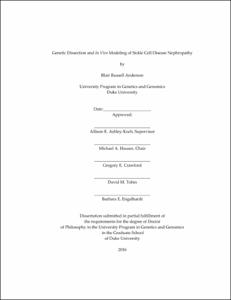 A common complication among sickle cell disease (SCD) patients is the development of renal disease. Paradoxically, the incidence of chronic kidney disease (CKD) increases as patient survival improves, and as such the development of sickle cell disease nephropathy (SCDN) has become an emergent health concern in SCD. For individuals with sickle cell anemia (SCA), albuminuria rates are as high as 68% in adult patients and as many as 18% of these patients progress to end-stage renal disease (ESRD). The detection of SCDN relies on relatively late markers of the disease process, namely proteinuria and reduced glomerular filtration rate (GFR), delaying identification of at-risk SCD patients prior to organ damage. Thus, early detection of those at risk is required to reduce morbidity and mortality among SCD patients.

In order to accomplish this, we have used a tiered approach employing genetic association strategy in patient populations and functional examination in relevant zebrafish model systems. We demonstrated previously that MYH9 and APOL1, in linkage disequilibrium on chromosome 22, are strong, independent predictors of risk for proteinuria in SCD. This region, particularly two major risk variants (named G1 and G2) in APOL1, has been replicated widely in non-SCD nephropathy and represents one of the strongest genetic signals for a complex human phenotype. Using the zebrafish system, we discovered a functional role for APOL1 in the developing zebrafish kidney and uncovered a complex genetic architecture, in which the G2 allele exerts adverse functions on the kidney and kidney cell types. Critically, we also found that APOL1 and MYH9 interact genetically, particularly in the context of anemic stress, which we also observed in a SCD patient population.

However, variants at the MYH9/APOL1 locus appear to only explain a part of the disease risk, suggesting that additional genetic factors may be contributing to renal outcome in SCD patients. As such, we performed an unbiased interrogation of the genome (GWAS) in order to uncover putative new nephropathy genes for genetic evaluation. Using a host of genetic methods to identify both common and rare variation present in SCDN individuals, we identified seven candidate loci associated with renal outcome in SCD. Again, using zebrafish models, we provide relevant functional evidence for a subset of these genetic candidates by assessing their effect on glomerular filtration barrier integrity.

Collectively, these genes and markers may indicate novel genetic mechanisms contributing to SCD nephropathy, and may further diagnostic paradigms for identifying those patients most at risk. In addition, these results stand to make significant progress in identifying novel therapeutics for SCDN.