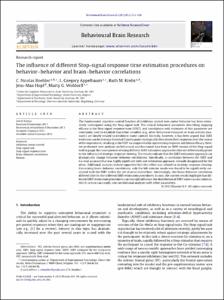 View / Download
603.3 Kb
Date
Authors
Boehler, C Nicolas
Appelbaum, L Gregory
Krebs, Ruth M
Hopf, Jens-Max
Woldorff, Marty G
Repository Usage Stats
159
views
169
downloads
Abstract
The fundamental cognitive-control function of inhibitory control over motor behavior has been extensively investigated using the Stop-signal task. The critical behavioral parameter describing stopping efficacy is the Stop-signal response time (SSRT), and correlations with estimates of this parameter are commonly used to establish that other variables (e.g., other behavioral measures or brain activity measures) are closely related to inhibitory motor control. Recently, however, it has been argued that SSRT estimates can be strongly distorted if participants strategically slow down their responses over the course of the experiment, resulting in the SSRT no longer reliably representing response-inhibition efficacy. Here, we performed new analyses on behavioral and functional data from an fMRI version of the Stop-signal task to gauge the consequences of using different SSRT estimation approaches that are differentially prone to the influence of strategic response slowing. The results indicate that the SSRT estimation approach can dramatically change behavior-behavior correlations. Specifically, a correlation between the SSRT and Go-trial accuracy that was highly significant with one estimation approach, virtually disappeared for the other. Additional analyses indeed supported that this effect was related to strategic response slowing. Concerning brain-behavior correlations, only the left anterior insula was found to be significantly correlated with the SSRT within the set of areas tested here. Interestingly, this brain-behavior correlation differed little for the different SSRT-estimation procedures. In sum, the current results highlight that different SSRT-estimation procedures can strongly influence the distribution of SSRT values across subjects, which in turn can ramify into correlational analyses with other parameters.
Type
Journal article
Subject
Brain
Brain Mapping
Decision Making
Female
Humans
Image Processing, Computer-Assisted
Inhibition (Psychology)
Magnetic Resonance Imaging
Male
Oxygen
Reaction Time
Statistics as Topic
Time Perception
Young Adult
Permalink
https://hdl.handle.net/10161/13539
Published Version (Please cite this version)
10.1016/j.bbr.2012.01.003
Publication Info
Boehler, C Nicolas; Appelbaum, L Gregory; Krebs, Ruth M; Hopf, Jens-Max; & Woldorff, Marty G (2012). The influence of different Stop-signal response time estimation procedures on behavior-behavior and brain-behavior correlations. Behav Brain Res, 229(1). pp. 123-130. 10.1016/j.bbr.2012.01.003. Retrieved from https://hdl.handle.net/10161/13539.
This is constructed from limited available data and may be imprecise. To cite this article, please review & use the official citation provided by the journal.
Collections
More Info
Show full item record