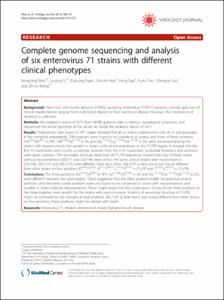 View / Download
2.4 Mb
Date
Authors
Wen, Hong-ling
Si, Lu-ying
Yuan, Xiao-jing
Hao, Shu-bin
Gao, Feng
Chu, Fu-lu
Sun, Cheng-xi
Wang, Zhi-yu
Show More
(8 total)
Repository Usage Stats
106
views
75
downloads
Abstract
BACKGROUND: Hand, foot and mouth diseases (HFMD) caused by enterovirus 71(EV71) presents a broad spectrum of clinical manifestations ranging from mild febrile disease to fatal neurolocal disease. However, the mechanism of virulence is unknown. METHODS: We isolated 6 strains of EV71 from HFMD patients with or without neurological symptoms, and sequenced the whole genomes of the viruses to reveal the virulence factors of EV71. RESULTS: Phylogenetic tree based on VP1 region showed that all six strains clustered into C4a of C4 sub-genotype. In the complete polypeptide, 298 positions were found to be variable in all strains, and three of these positions (Val(P814)/Ile(P814) in VP1, Val(P1148)/Ile(P1148) in 3A and Ala(P1728)/Cys)/Val(P1728) in 3C) were conserved among the strains with neurovirulence, but variable in strains without neurovirulence. In the 5'-UTR region, it showed that the first 10 nucleotides were mostly conserved, however from the 11th nucleotide, nucleotide insertions and deletions were quite common. The secondary structure prediction of 5'-UTR sequences showed that two of three strains without neurovirulence (SDLY11 and SDLY48) were almost the same, and all strains with neurovirulence (SDLY96, SDLY107 and SDLY153) were different from each other. SDLY107 (a fatal strain) was found different from other strains on four positions (C(P241)/T(P241), A(P571)/T(P571), C(P579)/T(P579) in 5'-UTR and T(P7335)/C(P7335) in 3'-UTR). CONCLUSIONS: The three positions (Val(P814)/Ile(P814) in VP1, Val(P1148)/Ile(P1148) in 3A and Ala(P1728)/Cys(P1728)/Val(P1728) in 3C), were different between two phenotypes. These suggested that the three positions might be potential virulent positions. And the three varied positions were also found to be conserved in strains with neurovirulence, and variable in strains without neurovirulence. These might reveal that the conservation of two of the three positions or the three together were specific for the strains with neurovirulence. Varation of secondary structure of 5'-UTR, might be correlated to the changes of viral virulence. SDLY107 (a fatal strain) was found different from other strains on four positions, these positions might be related with death.
Type
Journal article
Subject
Amino Acid Substitution
Cluster Analysis
Enterovirus A, Human
Genome, Viral
Genotype
Hand, Foot and Mouth Disease
Humans
Molecular Sequence Data
Phylogeny
RNA, Viral
Sequence Analysis, DNA
Viral Proteins
Virulence
Permalink
https://hdl.handle.net/10161/13591
Published Version (Please cite this version)
10.1186/1743-422X-10-115
Publication Info
Wen, Hong-ling; Si, Lu-ying; Yuan, Xiao-jing; Hao, Shu-bin; Gao, Feng; Chu, Fu-lu; ... Wang, Zhi-yu (2013). Complete genome sequencing and analysis of six enterovirus 71 strains with different clinical phenotypes. Virol J, 10. pp. 115. 10.1186/1743-422X-10-115. Retrieved from https://hdl.handle.net/10161/13591.
This is constructed from limited available data and may be imprecise. To cite this article, please review & use the official citation provided by the journal.
Collections
More Info
Show full item record