Changes in HIV risk behavior and seroincidence among clients presenting for repeat HIV counseling and testing in Moshi, Tanzania. 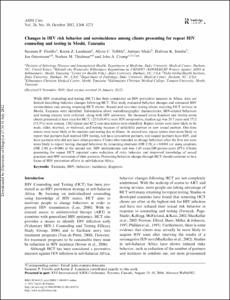 Professor of Medicine
Broadly, my research focuses on a range of clinical and social issues that affect persons living with or at risk for HIV infection in resource-poor settings. In Tanzania, our group is applying novel methods to optimize HIV testing uptake among high-risk groups. We recently demonstrated that the Discrete Choice Experiment (DCE), a form of stated preference survey research, is a robust tool for identifying (a) which characteristics of HIV testing options are most preferred by different populati
Alphabetical list of authors with Scholars@Duke profiles.