The Golden Relationships: An Exploration of Fibonacci Numbers and Phi 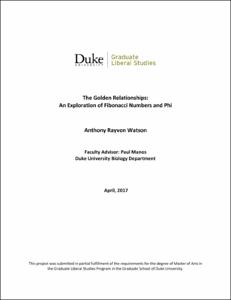 View / Download
2.0 Mb
Date
Author
Watson, Anthony R.
Advisor
Manos, Paul Steven
Repository Usage Stats
901
views
16,761
downloads
Abstract
The Greek letter Ø (Phi), represents one of the most mysterious numbers (1.618…) known to humankind. Historical reverence for Ø led to the monikers “The Golden Number” or “The Devine Proportion”. This simple, yet enigmatic number, is inseparably linked to the recursive mathematical sequence that produces Fibonacci numbers. Fibonacci numbers have fascinated and perplexed scholars, scientists, and the general public since they were first identified by Leonardo Fibonacci in his seminal work Liber Abacci in 1202. These transcendent numbers which are inextricably bound to the Golden Number, seemingly touch every aspect of plant, animal, and human existence. The most puzzling aspect of these numbers resides in their universal nature and our inability to explain their pervasiveness. An understanding of these numbers is often clouded by those who seemingly find Fibonacci or Golden Number associations in everything that exists. Indeed, undeniable relationships do exist; however, some represent aspirant thinking from the observer’s perspective. My work explores a number of cases where these relationships appear to exist and offers scholarly sources that either support or refute the claims. By analyzing research relating to biology, art, architecture, and other contrasting subject areas, I paint a broad picture illustrating the extensive nature of these numbers. In particular, the role of Fibonacci Numbers in the plant and animal kingdoms is analyzed within the context of quantification. Likewise, art, architecture, and aesthetics is examined for Fibonacci and Golden relationships to determine if an innate human preference for these associations exists and to what degree it can be measured. Finally, I draw conclusions supporting the existence of these unique relationships, and offer theories supporting adaptive advantages in living entities.
Type
Master's thesis
Department
Graduate Liberal Studies
Subject
Fibonacci Numbers, Phi, golden section, golden spiral, golden triangle
Permalink
https://hdl.handle.net/10161/14077
Citation
Watson, Anthony R. (2017). The Golden Relationships: An Exploration of Fibonacci Numbers and Phi. Master's thesis, Duke University. Retrieved from https://hdl.handle.net/10161/14077.
Collections
More Info
Show full item record