Optimism and survival: does an optimistic outlook predict better survival at advanced ages? A twelve-year follow-up of Danish nonagenarians. 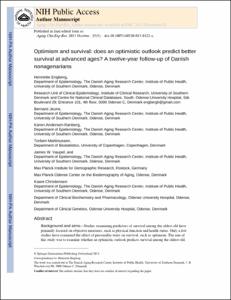 View / Download
1.1 Mb
Date
Authors
Engberg, Henriette
Jeune, Bernard
Andersen-Ranberg, Karen
Martinussen, Torben
Vaupel, James W
Christensen, Kaare
Repository Usage Stats
119
views
117
downloads
Abstract
BACKGROUND AND AIMS: Studies examining predictors of survival among the oldest-old have primarily focused on objective measures, such as physical function and health status. Only a few studies have examined the effect of personality traits on survival, such as optimism. The aim of this study was to examine whether an optimistic outlook predicts survival among the oldest-old. METHODS: The Danish 1905 Cohort Survey is a nationwide, longitudinal survey comprising all individuals born in Denmark in 1905. At baseline in 1998, a total of 2,262 persons aged 92 or 93 agreed to participate in the intake survey. The baseline in-person interview consisted of a comprehensive questionnaire including physical functioning and health, and a question about whether the respondent had an optimistic, neutral or pessimistic outlook on his or her own future. RESULTS: During the follow-up period of 12 years (1998-2010) there were 2,239 deaths (99 %) in the 1905 Cohort Survey. Univariable analyses revealed that optimistic women and men were at lower risk of death compared to their neutral counterparts [HR 0.82, 95 % CI (0.73-0.93) and 0.81, 95 % CI (0.66-0.99), respectively]. When confounding factors such as baseline physical and cognitive functioning and disease were taken into account the association between optimism and survival weakened in both sexes, but the general pattern persisted. Optimistic women were still at lower risk of death compared to neutral women [HR 0.85, 95 % CI (0.74-0.97)]. The risk of death was also decreased for optimistic men compared to their neutral counterparts, but the effect was non-significant [HR 0.91, 95 % CI (0.73-1.13)]. CONCLUSION: An optimistic outlook appears to be a significant predictor of survival among the oldest-old women. It may also be a significant predictor for men but the sample size is small.
Type
Journal article
Subject
Aged
Denmark
Female
Follow-Up Studies
Health Status
Humans
Longitudinal Studies
Male
Survival
Permalink
https://hdl.handle.net/10161/14710
Published Version (Please cite this version)
10.1007/s40520-013-0122-x
Publication Info
Engberg, Henriette; Jeune, Bernard; Andersen-Ranberg, Karen; Martinussen, Torben; Vaupel, James W; & Christensen, Kaare (2013). Optimism and survival: does an optimistic outlook predict better survival at advanced ages? A twelve-year follow-up of Danish nonagenarians. Aging Clin Exp Res, 25(5). pp. 517-525. 10.1007/s40520-013-0122-x. Retrieved from https://hdl.handle.net/10161/14710.
This is constructed from limited available data and may be imprecise. To cite this article, please review & use the official citation provided by the journal.
Collections
More Info
Show full item record