Origin and evolution of HIV-1 in breast milk determined by single-genome amplification and sequencing. 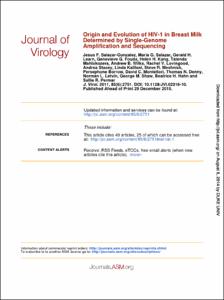 Associate Professor in Pediatrics
Dr Fouda's research interest is in understanding infant immune responses in the setting of infection and vaccination. Her current work focuses on HIV mother to child transmission. Wilburt C. Davison Distinguished Professor
Dr. Permar's work focuses on the development of vaccines to prevent vertical transmission of neonatal viral pathogens. She has utilized the nonhuman primate model of HIV/AIDS to characterize the virus-specific immune responses and virus evolution in breast milk and develop a maternal vaccine regimen for protection against breast milk transmission of HIV. In addition, Dr. Permar's lab has advanced the understanding of HIV-specific immune responses and virus evolution in vertically-transmitting an
Alphabetical list of authors with Scholars@Duke profiles.