The Danger of Party Government 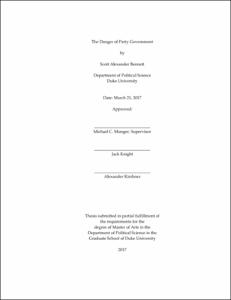 American voters understand that elections have consequences, but they have become so disillusioned by their political system that approximately 40 percent have self-selected out of the two-party circus, choosing instead to identify as independent or unaffiliated which often requires them to forego their primary election voting rights. They understand that the process no longer serves its intended purpose of providing for representative government. Nevertheless, when it comes to elections, Americans get it wrong in just about every way possible. They spend so much time debating which superficial features of the electoral system—voter ID laws, polling place hours and locations, voter registration deadlines, etc.—are destroying the political process that they overlook the real cause of its decay: that political parties exercise control over the rules of the electoral system.

At the end of the day, people want a government that works. It is quite clear that the political system we have now simply does not allow for that. Less obvious are exactly why this is so, and what can be done. The role of this paper, then, is as a sort of citizen’s primer to our electoral crisis. I begin by tracing the origins of American political parties and describe how they and their agents in government mold the electoral system to their advantage in getting and maintaining control of government. Next, I discuss the ways in which that system is so deleterious to stable, functioning government and “national attachment” in the body politic. I then propose an alternative electoral system that would allow for fair and effective representation of more people, helping to rebuild the necessary trust and confidence in our fundamental political institutions. Finally, I reflect on the dangers of continuing to use a system in which political parties—private organizations—abuse state power and the fundamental institution of democracy—the election—to protect and advance their private interests, and how institutional collapse might be avoided.