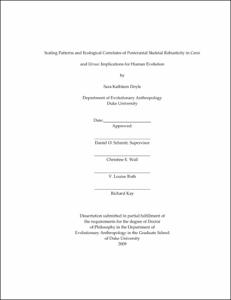 There has been a trend toward decreasing skeletal robusticity in the genus Homo throughout the Pleistocene, culminating in the gracile postcrania of living modern humans. This change is typically attributed to changing tool technologies and subsistence patterns among human groups. However, other mammalian groups also experience a similar change in their postcranial strength over the same time period. It is proposed in this dissertation that ecological variables are correlated with measures of postcranial strength and may be a better explanation for Holocene skeletal gracilization in humans, as well as in other mammalian genera. This hypothesis is investigated through a close examination of the scaling patterns in two extant genera, Canis and Ursus, and a comparison of scaling patterns and relative strength of different species of Canis, including a fossil species that provides information about temporal change. Measurements of limb length, joint surface area, bone diameter, and strength measurements derived from radiographic images of long bone midshafts of North American specimens of Canis, (including the fossil Canis dirus) and Ursus were collected. Scaling patterns of the cross-sectional variables on limb length and joint surfaces were analyzed for the interspecific and intraspecific samples.

The first hypothesis tested was that Canis scales with geometric similarity of cross-sectional variables on bone length and body mass, and the Ursus scales with elastic similarity. Larger Canis have relatively stronger postcrania than smaller Canis. The primary way in which this strength is achieved in larger individuals is through a relatively shortening of the bone length. The second hypothesis tested was that postcranial strength is correlated with ecological variables. To investigate this hypothesis, scaling patterns of different species of Canis were compared, including the fossil dire wolf. The results show that the dire wolf is relatively stronger than its living congenerics. There is also a strong relationship between the ratio of prey body mass to predator body mass and relative strength for these species. Carnivores that are hunting animals much larger than themselves must have postcranial skeletons that are strong enough to withstand the loading of the skeleton that occurs during hunting, taking down, and processing large herbivores.