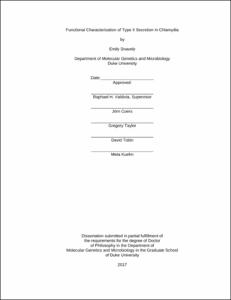 Chlamydiae are obligate intracellular bacteria that infect a wide range of animal hosts. For a successful infection, interaction with the host cell by use of the type II (T2), type III (T3), and type V (T5) secretion systems is needed to secure nutrients and subvert the host innate-immune responses. While some the substrates and functions of the T3 and T5 secretion systems are known, a comprehensive understanding of what proteins constitute T2S substrates is largely lacking. Only one protein has been confirmed to be a T2S effector in C. trachomatis, the protease CPAF. In this work, we investigate the role of the T2SS and CPAF during C. trachomatis infection.

CPAF cleaves a defined set of mammalian and Chlamydia proteins in vitro. As a result, this protease has been proposed to modulate a range of bacterial and host cellular functions. However, it has recently come into question the extent to which many of its identified substrates constitute bona fide targets of proteolysis in infected host cells, rather than artifacts of post lysis degradation. Here we clarify the role played by CPAF in cellular models of infection by analyzing Chlamydia trachomatis mutants deficient for CPAF activity. We identified a mutant in Type II secretion (T2S) that accumulates unprocessed CPAF and two strains with nonsense, loss-of-function mutations in cpa. HeLa cells infected with these mutants did not display cleavage of previously reported CPAF substrates and lysates from HeLa cells infected with either T2S- or CPAF- C. trachomatis did not possess any detectable in vitro CPAF proteolytic activity. CPAF-deficient mutants displayed impaired generation of infectious elementary bodies (EBs), indicating an important role for this protease in the full replicative potential of C. trachomatis. HeLa cells infected with cpa mutant strains were not defective for cellular traits that have been previously attributed to CPAF activity, including resistance to staurosporine-induced apoptosis, altered NFĸB-dependent gene expression, and resistance to reinfection. However, these observations do not imply that previously identified substrates are not targets of processing by CPAF in infected cells. We provide evidence in live cells that CPAF-mediated protein processing of at least two protein targets, vimentin filaments and the nuclear envelope protein Lamin-associated protein 1 (LAP1), a new CPAF substrate, occurs rapidly after the loss of the inclusion membrane integrity, but before loss of plasma membrane permeability and cell lysis. We postulate that CPAF plays a role late in infection, possibly during the stages leading to the dismantling of the infected cell prior to the release of EBs during cell lysis.

We further show defects in T2S impact bacterial attachment to host cells, intracellular growth, the biochemical properties of glycogen, and lytic exit. We sought to understand of the basis of these phenotypes and identify additional substrates of the T2SS which contribute towards them. We use label-free quantitative liquid chromatography-tandem mass spectrometry (LC-MS/MS) for a comprehensive analysis of proteins present within WT and T2S-defective C. trachomatis bacteria. In combination with immunofluorescence analyses, we present evidence of a defined set of secreted proteins that associate with glycogen in the inclusion during infection and propose this polymer functions in regulating proteins secreted into the inclusion lumen.