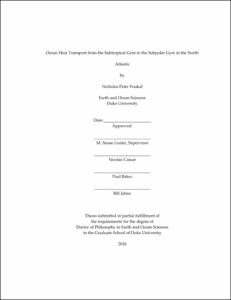 The North Atlantic Ocean transports on the order of 1 petawatt of heat poleward from the Equator toward the high-latitude Arctic via an exchange of warm, upper-layer water for cold bottom water, reducing the Equator-to-pole temperature gradient and providing an opportunity for regional climate predictability at seasonal to decadal time scales. As more high-quality observations and numerical models of the ocean have become available in the past decade, oceanographers have realized that the variability in this oceanic meridional heat transport is not coherent across latitudes, with a prominent break in the meridional coherence between the subtropical gyre and the subpolar gyre. In this dissertation, I demonstrate the progress I have made on understanding how heat is conveyed from the subtropical gyre to the subpolar gyre in the North Atlantic at these critical inter-gyre latitudes (35°N-50°N).

I use a suite of data including databases of in situ measurements of oceanic temperature and salinity, satellite observations of sea-surface temperature and height, and ocean model output of ocean current velocities, temperature and salinity. I conclude that a majority of the inter-gyre heat transport in the North Atlantic can be explained by variability in the strength of the sub-surface transport between the gyres. In this work, I also test whether pathways for propagating sea-surface temperature anomalies exist between the gyres as has been previously suggested and find that there is no evidence for this pathway in more modern satellite measurements. In addition, I show that variability in the sub-surface pathway cannot be explained by dynamics in the size and strength of the subpolar gyre as has long been assumed. Finally, I do a detailed analysis within two ocean circulation models and conclude that the oceanic heat fluxes are as important or more important as the surface atmospheric forcing to the temperature variability in the northeastern Atlantic, even at high frequencies. I then find that the origin of these oceanic heat fluxes stem from variability in the upper limb of the overturning circulation at inter-gyre latitudes. These results impact how we might expect to track ocean heat fluxes and thus where to look for climate predictability in the North Atlantic sector.