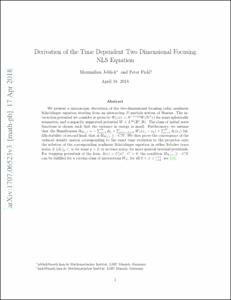 View / Download
342.7 Kb
Authors
Jeblick, M
Pickl, P
Repository Usage Stats
39
views
15
downloads
Abstract
In this paper, we present a microscopic derivation of the two-dimensional focusing cubic nonlinear Schr\"odinger equation starting from an interacting $N$-particle system of Bosons. The interaction potential we consider is given by $W_\beta(x)=N^{-1+2 \beta}W(N^\beta x)$ for some bounded and compactly supported $W$. We assume the $N$-particle Hamiltonian fulfills stability of second kind. The class of initial wave functions is chosen such that the variance in energy is small. We then prove the convergence of the reduced density matrix corresponding to the exact time evolution to the projector onto the solution of the corresponding nonlinear Schr\"odinger equation in either Sobolev trace norm, if the external potential is in some $L^p$ space, $p \in ]2, \infty]$, or in trace norm, for more general external potentials.
Type
Journal article
Subject
math-ph
math-ph
math.MP
Permalink
https://hdl.handle.net/10161/17126
Collections
More Info
Show full item record Visiting Professor in the Trinity College of Arts and Sciences
Starting with the autumn term 2018 I will teach the foundational mathematics and integrated science courses in the undergraduate program at DKU. In the coming years, other classes on several topics of mathematics and mathematical physics will be taught.