"Into the Mainstream and Oblivion": Julian Mayfield's Black Radical Tradition, 1948-1984 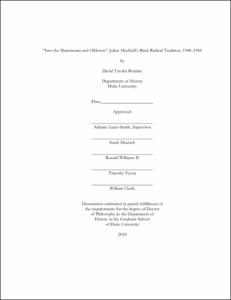 “Into the Mainstream and Oblivion” is a study of the intellectual and political biography of the African American writer and political activist Julian Hudson Mayfield. As a member of the black Left, Mayfield’s life of activism and art bring the complex network of artists, activists, and political theorists who influenced the construction, tactics, and strategies of social movements during the latter half of the twentieth century into sharper focus revealing the ways in which black, modernist writing served as a critical site of political, social, and cultural ferment during the Cold War. Using art to communicate ideas and arguments about the relationship between race, gender, and political economy, Mayfield and his contemporaries illuminate the broader influence of black writers on American culture and politics. In addition, the state’s response to Mayfield’s life of literary activism sheds light on the ways in which anti-communism worked to disrupt, marginalize, and dampen the effect of challenges to white supremacy.

The project makes extensive use of archives at the Schomburg Center for Research in Black Life in Harlem, which houses the archives of Julian Mayfield and many of his contemporaries. In addition to these primary source documents, this project examines government documents produced by the extensive surveillance of African American writers by various government agencies, including the Federal Bureau of Investigation, Department of State, and United States Information Agency. Finally, the dissertation has benefitted from a close working relationship with the family of Julian Mayfield and oral histories from contemporaries which sheds light on the complex interplay of gender and class among black social movements during the latter half of the twentieth century.