The Cellular Determinants of Spinal and Peripheral Pain Processing 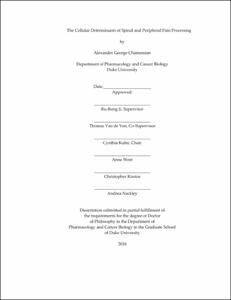 Chronic pain is a major public health issue, affecting over 100 million people in costing over $600 million annually in the United States. The lack of effective therapies for chronic pain have directly contributed to the ongoing epidemic of opioid abuse and addiction. Deeper understanding the pathogenesis of chronic pain is a prerequisite for remedying the status quo. To that end, in this dissertation, I have undertaken two projects that aim to elucidate the key cellular elements of mechanical pain in the periphery and spinal cord.

Mechanical allodynia is a cardinal feature of pathological pain in which innocuous mechanical stimulation such as light touch produces a painful sensation. Recent work has demonstrated the necessity of cutaneous Aβ low-threshold mechanoreceptors (Aβ-LTMRs) for mechanical allodynia-like behaviors in mice, but its remains unclear whether activation of these neurons alone is sufficient to produce pain behaviors in pathological settings. To address this question, in the first part of this dissertation, I generated and characterized a transgenic mouse line that expresses the optogenetic actuator channelrhodopsin-2 (ChR2) conditionally in Vesicular Glutamate Transporter 1 (Vglut1)-expressing sensory neurons(Vglut1-ChR2). I show that the Vglut1-ChR2 comprises a heterogeneous population of Neurofilament 200-positive, large-sized sensory neurons with cutaneous projections that terminate in Merkel Cell-Neurite Complexes, Meissner Corpuscles and Hair Follicles and with spinal projections that terminate in the deep dorsal horn (Lamina IIi-V) and ventral horn in the spinal cord. In naive Vglut1-ChR2 mice, acute transdermal photostimulation of the plantar hindpaw with blue (470nm) light produced paw withdrawal behaviors in an intensity- and frequency-dependent manner that were abolished by selective pharmacological A-fiber blockade. light-evoked nocifensive behaviors such as licking, biting, jumping and vocalization were virtually absent in Vglut1-ChR2, even at the highest stimulation intensity and frequency. Plantar photostimulation of Vglut1-ChR2 mice in a Real-Time Place-Escape/Avoidance (RT-PEA) assay did not produce aversion, in contrast to the strong aversion elicited in mice that conditionally express ChR2 in Nav1.8-positive and Npy2r-positive nociceptors. Surprisingly, in the Spared Nerve Injury model of neuropathic pain, Vglut1-ChR2 mice did not show significant differences in light-evoked withdrawal behaviors or real-time aversion despite hypersensitivity to natural mechanical stimuli. Thus, I conclude that optogenetic activation of Vglut1-ChR2 neurons alone is not sufficient to produce pain-like behaviors in neuropathic mice.

In the second part of this dissertation, I investigated the cellular determinants of mechanical pain processing in the spinal dorsal horn (SDH), which is comprised of distinct neuronal populations that process different somatosensory modalities. Somatostatin (SST)-expressing interneurons in the SDH have been implicated specifically in mediating mechanical pain. Identifying the transcriptomic profile of SST neurons could elucidate the unique genetic features of this population and enable selective analgesic targeting. To that end, I combined the Isolation of Nuclei Tagged in Specific Cell Types (INTACT) method and Fluorescence Activated Nuclei Sorting (FANS) to capture tagged SST nuclei in the SDH of adult male mice. Using RNA-sequencing (RNA-seq), I uncovered more than 13,000 genes. Differential gene expression analysis revealed more than 900 genes with at least 2-fold enrichment. In addition to many known dorsal horn genes, I identified and validated several novel transcripts from pharmacologically tractable functional classes: Carbonic Anhydrase 12 (Car12), Phosphodiesterase 11A (Pde11a), and Protease-Activated Receptor 3 (F2rl2). In situ hybridization of these novel genes showed differential expression patterns in the SDH, demonstrating the presence of transcriptionally distinct subpopulations within the SST population. Overall, my findings provide new insights into the gene repertoire of SST dorsal horn neurons and reveal several novel targets for pharmacological modulation of this pain-mediating population and pathological pain.