Cohort Succession, Intergenerational Transmission, and the Decline of Religion in the United States 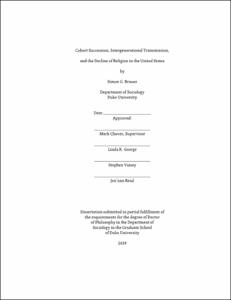 Scholars over the past several decades have noted the resilience of religion in the United States (Chaves 2011; Gorski and Altınordu 2008; Hadden 1987:601–2; Presser and Chaves 2007), but many recognize that the youngest US cohorts are significantly lower on several religious characteristics than older cohorts (Hout and Fischer 2014; Putnam and Campbell 2012; Voas and Chaves 2016). Scholars have proposed several explanations for this trend, disagreeing about whether it is the result of a particular cultural moment or an ongoing process leading to even greater religious decline. Replicating Voas’ (2009) model of slow, predictable decline across cohorts, I find that, surprisingly, the US closely fits the same trajectory of religious decline as European countries, suggesting a shared demographic process as opposed to idiosyncratic change. Family dynamics are an important part of this story. Family characteristics are some of the most significant predictors of religious outcomes (Hoge, Petrillo, and Smith 1982; Smith and Denton 2005; Uecker and Ellison 2012), but only a few studies have examined how aggregate religious decline is shaped by family processes (Chaves 1991; Crockett and Voas 2006; Kelley and De Graaf 1997). Even fewer have done so using self-reported data from members of several generations of the same families (Bengtson et al. 2018; Bengtson, Putney, and Harris 2013; Smith and Denton 2005). I advance this line of research by decomposing within-family, inter-generational religious decline into components that can be attributed to factors within the family and those that cannot. Whereas the combination of individual and family characteristics explains the decline in religious service attendance within families, it does not explain much of the decline in self-rated religiosity, suggesting that the intergenerational transmission of religious behavior operates differently than the intergenerational transmission of internal sense of religiosity. I consider these findings in light of theory and research by developmental psychologists and sociologists of the family on what leads children to adopt (or not) their parents’ values, attitudes, and practices.