The relation between insecure attachment and posttraumatic stress: Early life versus adulthood traumas. 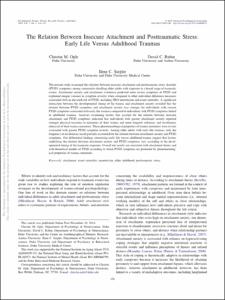 Professor in Psychiatry and Behavioral Sciences
My research efforts are in the area of developmental health psychology and organized around understanding the role of personality in health and disease in middle and later life. My primary research activity is as Principal Investigator of the UNC Alumni Heart Study (UNCAHS) a prospective epidemiologic study of 5000 middle aged men and women and 1200 of their spouses that evaluates the role of personality on coronary heart disease and coronary heart disease risk, cancer, and normal a
Alphabetical list of authors with Scholars@Duke profiles.