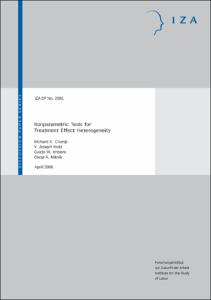 View / Download
228.4 Kb
Date
Authors
Crump, RK
Joseph Hotz, V
Imbens, GW
Mitnik, OA
Repository Usage Stats
285
views
194
downloads
Abstract
A large part of the recent literature on program evaluation has focused on estimation of the average effect of the treatment under assumptions of unconfoundedness or ignorability following the seminal work by Rubin (1974) and Rosenbaum and Rubin (1983). In many cases however, researchers are interested in the effects of programs beyond estimates of the overall average or the average for the subpopulation of treated individuals. It may be of substantive interest to investigate whether there is any subpopulation for which a program or treatment has a nonzero average effect, or whether there is heterogeneity in the effect of the treatment. The hypothesis that the average effect of the treatment is zero for all subpopulations is also important for researchers interested in assessing assumptions concerning the selection mechanism. In this paper we develop two nonparametric tests. The first test is for the null hypothesis that the treatment has a zero average effect for any subpopulation defined by covariates. The second test is for the null hypothesis that the average effect conditional on the covariates is identical for all subpopulations, in other words, that there is no heterogeneity in average treatment effects by covariates. Sacrificing some generality by focusing on these two specific null hypotheses we derive tests that are straightforward to implement.
Type
Journal article
Subject
Average treatment effects
Treatment effect heterogeneity
Unconfoundedness
causality
Permalink
https://hdl.handle.net/10161/1998
Collections
More Info
Show full item record