The high prevalence of substance use disorders among recent MDMA users compared with other drug users: Implications for intervention. 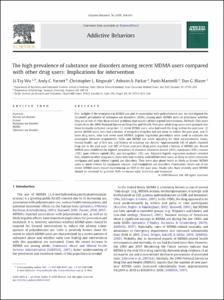 View / Download
216.7 Kb
Date
Authors
Wu, Li-Tzy
Parrott, Andy C
Ringwalt, Christopher L
Patkar, Ashwin A
Mannelli, Paolo
Blazer, Dan G
Repository Usage Stats
45
views
13
downloads
Abstract
In light of the resurgence in MDMA use and its association with polysubstance use, we investigated the 12-month prevalence of substance use disorders (SUDs) among adult MDMA users to determine whether they are at risk of other drug-related problems that would call for targeted interventions.Data were drawn from the 2006 National Survey on Drug Use and Health. Past-year adult drug users were grouped into three mutually exclusive categories: 1) recent MDMA users, who had used the drug within the past year; 2) former MDMA users, who had a history of using this drug but had not done so within the past year; and 3) other drug users, who had never used MDMA. Logistic regression procedures were used to estimate the association between respondents' SUDs and MDMA use while adjusting for their socioeconomic status, mental health, age of first use, and history of polydrug use.Approximately 14% of adults reported drug use in the past year, and 24% of those past-year drug users reported a history of MDMA use. Recent MDMA users exhibited the highest prevalence of disorders related to alcohol (41%), marijuana (30%), cocaine (10%), pain reliever/opioid (8%), and tranquilizer (3%) use. Adjusted logistic regression analyses revealed that, relative to other drug users, those who had recently used MDMA were twice as likely to meet criteria for marijuana and pain reliever/opioid use disorders. They were also about twice as likely as former MDMA users to meet criteria for marijuana, cocaine, and tranquilizer use disorders.Seven out of ten recent MDMA users report experiencing an SUD in the past year. Adults who have recently used MDMA should be screened for possible SUDs to ensure early detection and treatment.
Type
Journal article
Subject
Humans
Substance-Related Disorders
Amphetamine-Related Disorders
N-Methyl-3,4-methylenedioxyamphetamine
Epidemiologic Methods
Psychiatric Status Rating Scales
Age of Onset
Socioeconomic Factors
Adolescent
Adult
Child
United States
Female
Male
Young Adult
Permalink
https://hdl.handle.net/10161/20004
Published Version (Please cite this version)
10.1016/j.addbeh.2009.03.029
Publication Info
Wu, Li-Tzy; Parrott, Andy C; Ringwalt, Christopher L; Patkar, Ashwin A; Mannelli, Paolo; & Blazer, Dan G (2009). The high prevalence of substance use disorders among recent MDMA users compared with other drug users: Implications for intervention. Addictive behaviors, 34(8). pp. 654-661. 10.1016/j.addbeh.2009.03.029. Retrieved from https://hdl.handle.net/10161/20004.
This is constructed from limited available data and may be imprecise. To cite this article, please review & use the official citation provided by the journal.
Collections
More Info
Show full item record