Concurrent use of methamphetamine, MDMA, LSD, ketamine, GHB, and flunitrazepam among American youths. 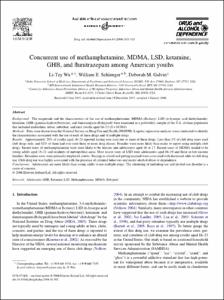 View / Download
254.1 Kb
Date
Authors
Wu, Li-Tzy
Schlenger, William E
Galvin, Deborah M
Repository Usage Stats
46
views
22
downloads
Abstract
The magnitude and the characteristics of the use of methamphetamine, MDMA (Ecstasy), LSD (d-lysergic acid diethylamide), ketamine, GHB (gamma-hydroxybutyrate), and flunitrazepam (Rohypnol) were examined in a probability sample of the U.S. civilian population that included multiethnic urban, suburban, and rural youths aged 16-23 (N=19,084).Data were drawn from the National Survey on Drug Use and Health (NSDUH). Logistic regression analyses were conducted to identify the characteristics associated with the use of each of these drugs and of multiple drugs.Approximately 20% of youths aged 16-23 reported having ever used one or more of these drugs. Less than 1% of club drug users used club drugs only, and 82% of them had ever used three or more drug classes. Females were more likely than males to report using multiple club drugs. Recent users of methamphetamine were most likely to be females and adolescents aged 16 or 17. Recent users of MDMA tended to be young adults aged 18-21 and residents of metropolitan areas. Most recent users of LSD were adolescents aged 16-19 and those in low-income families. Ketamine users were primarily employed youths. Staying in school and getting married were associated with decreased odds of club drug use. Club drug use was highly associated with the presence of criminal behaviors and recent alcohol abuse or dependence.Adolescents are more likely than young adults to use multiple drugs. The clustering of multidrug use and alcohol use disorder is a cause of concern.
Type
Journal article
Subject
Humans
Substance-Related Disorders
Methamphetamine
N-Methyl-3,4-methylenedioxyamphetamine
Sodium Oxybate
Ketamine
Lysergic Acid Diethylamide
Flunitrazepam
Data Collection
Incidence
Prevalence
Age of Onset
Demography
Adolescent
Adult
Female
Male
Permalink
https://hdl.handle.net/10161/20041
Published Version (Please cite this version)
10.1016/j.drugalcdep.2006.01.002
Publication Info
Wu, Li-Tzy; Schlenger, William E; & Galvin, Deborah M (2006). Concurrent use of methamphetamine, MDMA, LSD, ketamine, GHB, and flunitrazepam among American youths. Drug and alcohol dependence, 84(1). pp. 102-113. 10.1016/j.drugalcdep.2006.01.002. Retrieved from https://hdl.handle.net/10161/20041.
This is constructed from limited available data and may be imprecise. To cite this article, please review & use the official citation provided by the journal.
Collections
More Info
Show full item record