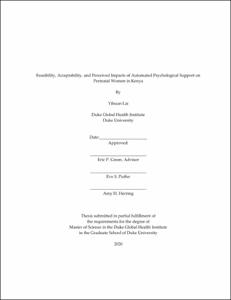 Background: Perinatal depression in low- and middle-income countries (LMICs) is common and associated with many negative outcomes. Although effective interventions exist, many cases in LMICs remain untreated due to a lack of human resources. Task-sharing approaches such as Thinking Healthy program were proved to be feasible to expand access to treatment in LMICs but were facing certain barriers to scale up. In this study, we adapted Thinking Healthy Program to the artificial intelligence system called Tess (named Zuri in Kenya) to provide automated psychological support for perinatal women in Kenya. The objective was to gather preliminary data on feasibility, acceptability, and perceived impacts of the automated psychological support on perinatal women in Kenya.

Methods: Women were recruited from two public hospitals in Kiambu County, Kenya. After enrollment, each woman was matched to another new participant with similar maternity status and was randomly assigned to have a 1-week or 2-week baseline period. We prompted participants to rate their mood every 3 days throughout the study. We also reviewed system logs and conducted in-depth interviews to determine feasibility, acceptability, and perceived impacts of the intervention.

Results: 647 women were invited to participate; 86 of them completed the SMS screening and 41 of them enrolled in the study. Among all the enrolled participants, 27 of them (65.9%) sent at least one message to Zuri and 31 (75.6%) of them submitted at least three ratings. 14 women (34.1%) engaged with Zuri beyond registration. Free chats were a big part of the participants’ interactions with Zuri. During free chats, the most common intervention module was mindfulness-based meditation, and the most common rapport-building module was discussion about the women’s passion. Most interviewees expressed positive attitudes towards Zuri. They also reported some positive changes in their life after using Zuri.

Conclusion: The preliminary data showed that Zuri was feasible, acceptable, and had some perceived impacts among a sample of pregnant women and new mothers in Kenya. Automated psychological support is still in its infancy, but it has great potential to close the large treatment gap that exists in many LMICs.