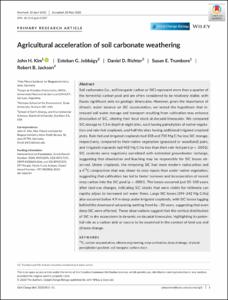 Adjunct Professor of Earth & Ocean Sciences
Robert B. Jackson is the Nicholas Chair of Global Environmental Change in the Earth and Ocean Sciences Division of the Nicholas School of the Environment and a professor in the Biology Department. His research examines how people affect the earth, including studies of the global carbon and water cycles, biosphere/atmosphere interactions, energy use, and global change. Rob Jackson received his B.S. degree in Chemical Engineering from Rice University (1983). He worked four years for the Dow Professor in the Division of Earth and Climate Science
Richter’s research and teaching links soils with ecosystems and the wider environment, most recently Earth scientists’ Critical Zone.  He focuses on how humanity is transforming Earth’s soils from natural to human-natural systems, specifically how land-uses alter soil processes and properties on time scales of decades, centuries, and millennia.  Richter's book, Understanding Soil Change (Cambridge University Press), co-authored with his former PhD
Alphabetical list of authors with Scholars@Duke profiles.