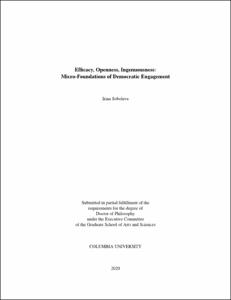 View / Download
18.8 Mb
Date
Author
Soboleva, Irina
Editors
Green, Donald P
Frye, Timothy
Repository Usage Stats
52
views
44
downloads
Abstract
What drives civic engagement in weak democracies? What are the psychological processes responsible for overcoming post-authoritarian learned helplessness? This dissertation argues that in non-Western political contexts, traditional psychological predictors of individual engagement in civic affairs---openness to experience, high self-efficacy, and low political skepticism---do not align with previously established Western patterns. Building on the results of a large-scale field experiment on a demographically diverse sample of 1,381 respondents, as well as multi-year ethnographic observation of community engagement in Ukraine, this dissertation demonstrates that perceived self-efficacy and collective efficacy improve respondents’ interest in civic engagement while suppressing their interest in running for office. In the first chapter, I explore what factors prompt citizens’ interest in joining an electoral commission, supporting a recycling campaign, establishing a civic council, and leading a homeowners’ association. Using original experimental data, I demonstrate that individual empowerment constitutes a sufficient condition for civic engagement. Moreover, contrary to most theoretical expectations, the effects of individual empowerment on involvement in local civic activities are comparable to the effects produced by civic education. This study represents one of the first experimental contributions to support the theory of democratic learning and shows that citizens benefit from democracy by practicing it and trying various civic activities rather than by learning democratic values through civic education and top-down democracy promotion. In the second chapter, I study the effects of personality traits on policy priorities and ideological preferences of Ukrainians. Previous research suggests that personality affects political attitudes by predisposing people to certain policies. Contrary to these findings, this chapter shows that personality predicts individual response to the revision of the status quo rather than preference for specific policies. I illustrate this logic by addressing one of the most counterintuitive associations between personality traits and political attitudes---the link between openness to experience and conservatism in Eastern Europe. Combining the results of open-ended coding and bootstrapped regression models, the analysis shows that openness to experience predicts both social liberalism and social conservatism. I build upon these findings to address the existing gaps in the personality theory of ideology by suggesting that those open to experience are, on average, more responsive to any policy suggestion that revises the status quo. In the final chapter, I examine the problem of nascent political ambition in weak democratic states. Building on the results of my original field experiment, I show that higher efficacy discourages political engagement in Ukraine. Specifically, increasing respondents’ collective efficacy, on average, disincentivizes them from running for city parliament. Most surprisingly, citizens with higher pre-treatment levels of internal political efficacy were the ones most dissuaded from running for office after the induction of collective efficacy. Their improved sense of collective efficacy might have discouraged them from political institutions that they consider powerless and inefficient. Altogether, these findings challenge existing wisdom in comparative political psychology by demonstrating that (1) psychological pathways to collective action are more context-dependent than previously assumed; (2) previously established effects of personality traits and self-evaluations on political behavior do not travel well beyond Western European and North American contexts; (3) self-efficacy and collective efficacy do not differ in their causal effects on individual attitudes and behavior; and (4) politically sophisticated individuals are put off from political office when reminded of alternative non-political ways of achieving collective goals, with this running from office creating a trap of declining political ambition in weak democracies. Thus, democratic promotion campaigns that increase self-efficacy or collective efficacy might suppress nascent political ambition when the population is skeptical of the quality of representative democratic institutions.
Type
Thesis/Dissertation
Permalink
https://hdl.handle.net/10161/21283
Citation
Soboleva, Irina (2020). Efficacy, Openness, Ingenuousness: Micro-Foundations of Democratic Engagement. Retrieved from https://hdl.handle.net/10161/21283.
Collections
More Info
Show full item record Assistant Professor of Behavioral Science at Duke Kunshan University
Dr. Soboleva specializes in psychological drivers of civic and political ambition. Her research targets civic engagement in developing countries, reframes traditional approaches to democracy promotion, and evaluates behavioral solutions to improving political efficacy at the local level. She is currently a member of the Editorial Board of the Journal of Social and Political Psychology.