A Nation on Paper: Making a State in the Republic of Biafra 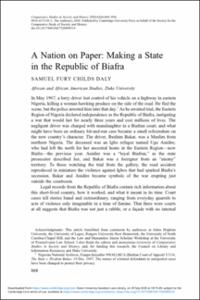 View / Download
246.2 Kb
Date
Author
Daly, SFC
Repository Usage Stats
29
views
16
downloads
Abstract
<jats:title>Abstract</jats:title><jats:p>What role did law play in articulating sovereignty and citizenship in postcolonial Africa? Using legal records from the secessionist Republic of Biafra, this article analyzes the relationship between law and national identity in an extreme context—that of the Nigerian Civil War (1967–1970). Ideas about order, discipline, and legal process were at the heart of Biafra's sense of itself as a nation, and they served as the rhetorical justification for its secession from Nigeria. But they were not only rhetoric. In the turmoil of the ensuing civil war, Biafra's courts became the center of its national culture, and law became its most important administrative implement. In court, Biafrans argued over what behaviors were permissible in wartime, and judges used law to draw the boundaries of the new country's national identity. That law played this role in Biafra shows something broader about African politics: law, bureaucracy, and paperwork meant more to state-making than declensionist views of postcolonial Africa usually allow. Biafra failed as a political project, but it has important implications for the study of law in postcolonial Africa, and for the nation-state form in general.</jats:p>
Type
Journal article
Permalink
https://hdl.handle.net/10161/21596
Published Version (Please cite this version)
10.1017/s0010417520000316
Publication Info
Daly, SFC (2020). A Nation on Paper: Making a State in the Republic of Biafra. Comparative Studies in Society and History, 62(4). pp. 868-894. 10.1017/s0010417520000316. Retrieved from https://hdl.handle.net/10161/21596.
This is constructed from limited available data and may be imprecise. To cite this article, please review & use the official citation provided by the journal.
Collections
More Info
Show full item record Assistant Professor of African and African American Studies
Samuel Fury Childs Daly is a historian of twentieth century Africa. His research bridges East and West Africa, combining the methods of legal, military, and social history to understand the period after independence. His current project considers the history of the Biafra War (1967-1970). This book, entitled A History of the Republic of Biafra