The End of Civilizations: The Role of Religion in the Evolution of Subnational Conflict, 1946-2007 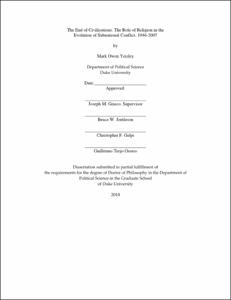 Conflict between states in an anarchic international system is generally the result of an inability among state leaders to successfully negotiate perceived power imbalances within the system. Interstate conflicts are relatively rare events and are generally short in duration; international pressures to quickly and permanently resolve conflicts before their effects are felt outside the region of conflict are often intense. In an increasingly global community, an international order in turmoil ripples through the global financial system, often leading to a weakening of state power within it.

Violent conflicts within state borders have been historically more common, with causative issues ranging from polity dissatisfaction or inequities in the economic structure of the state to disputes over territorial integrity and autonomy. Pressure to rapidly resolve conflict within states is differentially applied cross-regionally; however, where strategic interests of major-power states are involved, such conflicts are usually quickly addressed. Where no such interests exist, these conflicts can and do persist for decades, at often huge costs to state resources.

In the mid-1990s the number of ongoing subnational conflicts appeared to be trending upward and increasingly between dissimilar people groups; Samuel Huntington's Clash of Civilizations thesis posited that future conflict at the subnational and international levels would be increasingly between groups of differing civilizational origin. This study disputes this claim, intending instead to show that conflict between groups of dissimilar religious beliefs is more likely to escalate to violence than that occurring between civilizational groupings, especially after the end of the Cold War.

This study covers nearly 200 countries during the period 1946-2007, including those granted independence within the period and new republics formed in the wake of the breakup of the Soviet Union. If Huntington's thesis is correct, states located along defined civilizational "fault-lines" should experience a higher incidence of violent conflict at the state level. States that contain sufficiently large populations from differing civilizations (defined as cleft states) should also be more conflict prone. The differential advantages gained during modernization processes in the post-Cold War era should result in an upward trend in such conflict after 1989.

This study uses conflict data from the Uppsala Conflict Data Program, recording 1,670 conflict-years in over 100 countries within the observation period. Descriptive statistics suggest subnational conflicts have not become increasingly civilizational as Huntington described. Instead, conflict between dissimilar religious groups has become more common since the end of the Cold War. Multivariate analysis is used to estimate the relative importance of religious differences on the initiation of violent subnational conflict. In addition to the existence of religious cleavages, the salience of a number of realist variables is also considered.

Results show Huntington's theory to be insufficient to describe this evolution of subnational conflict. Civilizations are too broad to engender the necessary inclusivity in times of crisis, and the number of classifications theorized too narrow. However, results suggest religious cleavages to be equally weak predictors of future conflict likelihood at the subnational level. As in prior studies of civil wars, religion seems epiphenomenal in causative predictions of low-level subnational conflict initiation in the modern era.