Thermodynamic Investigations of Metalloproteins: Metal as Probe and Protein as Probe 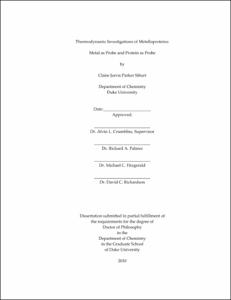 In Chapter 2, we probe the thermodynamic properties of the heme-bound iron to elucidate the structure-function relationships underlying two important physiological responses of hemoglobin (Hb): the Root Effect of hemoglobin from certain fish and the different nitrite reactivities of hemoglobins from clams. Hemoglobins of some fish exhibit significantly lowered oxygen affinity at low pH, allowing for proton-mediated release of O2. This phenomenon, known as the Root Effect, serves as a proton-driven pump delivering O2 to the swim bladders and eyes of the fish. The clam, ,<italic>L. pectinata</italic>, expresses functionally distinct Hb I that transports H2S and Hb II that transports O2. These two hemoglobins differ widely in their reactivity with nitrite, a reactant of great importance to the study of vasodilation in humans. The structural basis of the extreme pH-sensitivity of the Root Effect Hbs and the extreme reactivities of the <italic>Lucina Hbs</italic> with nitrite are debated. Focusing on the metal as the probe, we investigate the reduction potentials of these Hbs using spectroelectrochemistry and compare our findings with oxygen binding studies performed by our collaborators. In both cases, our data strongly suggest that steric hindrance is the determining factor governing the respective physiological response of each hemoglobin.

In Chapter 4, our focus shifts to the thermodynamic properties of the protein. Some pathogenic Gram-negative bacteria such as <italic>N. gonorrhoeae</italic> steal iron from their human host by expressing a receptor (TbpA/TbpB), which binds the human iron transport protein transferrin (Tf). Once iron crosses the outer membrane, ferric binding protein (FbpA) transports it across the periplasm to the cytosol. Focusing on the protein, we investigated the protein-protein interactions involved in this transport process and the roles that TbpA and TbpB play with the use of an H/D exchange and mass spectrometry based method termed SUPREX. We report herein the first direct measurement of periplasmic FbpA binding to the outer membrane protein TbpA and we demonstrate that both TbpA and TbpB individually can deferrate Tf without energy supplied from TonB, resulting in sequestration by apo-FbpA.

In Chapter 5, we extend our investigation of the <italic>N. gonorrhoeae</italic> iron uptake system by using the metal as the probe in one case and the protein as the probe in another case. TbpA, the &#946;-barrel receptor protein that is required for utilization of Fe2-Tf as an iron source, has a plug domain which we hypothesize binds iron and interacts with FbpA on the periplasmic side of the outer membrane. Utilizing SUPREX to monitor the thermodynamic properties of protein folding, we investigate 1) the possible interactions between the TbpA-plug and FbpA and 2) the ability of the TbpA-plug to bind iron.

Focusing on the metal as the probe, we designed an experimental apparatus to investigate the possible thermodynamic effects of the TbpA/TbpB receptor on the release of iron from Tf. We report the use of a competitive iron chelator and equilibrium dialysis allows for the spectroscopic monitoring of iron release from Tf in the absence of FbpA, but in the presence of opaque bacterial membrane preparations containing the receptor.