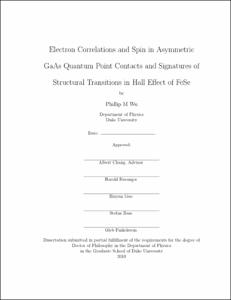 The 1D Wigner crystal is a long sought after strongly correlated quantum state. Here we present electronic transport data of asymmetric quantum point contacts (QPC) tuned to the spin-incoherent regime, which provides evidence for achieving the 1D Wigner state. Our result can be distinguished in several particularly noticeable ways. First, we utilize an asymmetric point contact geometry that is simple to fabricate and has not been studied previously. We are able to tune to the conductance anomalies simply by asymmetrically applying voltages to the gates. Second, we observe clear suppression of the first plateau and direct jumps to the second in these asymmetric QPCs at liquid helium temperatures (4.2 K). Such conductance behavior is indicative of Wigner crystal row formation.

This thesis suggests that the novel geometry and gating scheme allows for a novel way to search for strongly correlated electronic behavior in quasi-1D quantum wires. A key finding is the importance of asymmetric QPCs for observation of anomalous transport characteristics. We have observed a strongly developed e<super>2</super>/h feature under asymmetric voltage gating and zero applied magnetic field. Such a feature is attributed to enhanced spin energies in the system. We believe the asymmetric design allows for a relaxing of the 1D confinement so that a quasi-1D electron conformation develops, which in turn allows for various possible magnetic states. In addition, by optimally tuning the confinement potential, we observe an unexpected suppression of the 2e<super>2</super>/h plateau. This provides further evidence for unusual electron arrangements in the asymmetric quantum point contact.

I also discuss transport studies on the new FeSe superconductor. Our collaboration discovered the superconducting &beta;-FeSe compound with a Tc approximately 8 K. The crystal lattice structure of &beta;-FeSe is by far the simplest of the Fe superconductors. One of the most interesting observations regarding FeSe is that the crystal structure undergoes a structural transition at approximately 105 K from tetragonal to orthorhombic (or triclinic) symmetry. We believe this structural transition to be closely related to the origin of superconductivity in this class of materials.

Transport studies also seem to support this claim. From Hall effect measurements of bulk FeSe, we find that FeSe is likely a two band (electron and hole) superconductor, which suggests it is quite different from the cuprates, and that very unconventional superconducting mechanisms are at play. The temperature dependence of the Hall coefficient is measured, and found to rapidly increase below 105 K. This suggests the scattering time related to hole bands dominate the transport at low temperature. As there is no magnetic ordering observed at low temperature, we do not expect the scattering from random Fe magnetic impurities to play a significant role in the enhanced hole scattering times. Thus, we speculate that this change is related to the structural transition observed.