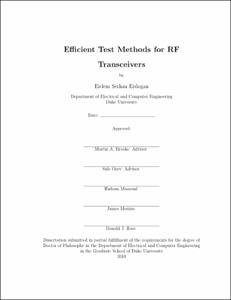 Advancements of the semiconductor technology opened a new era in

more functional devices in much smaller sizes. However, testing

these devices of today's technology became much harder and expensive

due to the complexity of the devices and the high operating speeds.

feature sizes increase the probability of parametric and catastrophic

faults because of the severe effects of process variations. Manufacturers

have to increase their test budgets to address quality and reliability

blocks into single device, increases test costs further because of the

blocks, such as synthesizers, data converters and the analog RF front-end

leading to a mixed signal device. Verification of the specifications and

functionality of each circuit block and the overall transceiver require

RF instrumentation and lengthy test routines. In this dissertation, we

transceivers which are low cost alternatives to traditional tests.

In the first component level test, we focus on in-band phase noise of the

additional computation of measured specs. We propose a built in test (BiT)

circuit to perform a go/no-go test for in-band PLL phase noise. The proposed

controlled oscillator (VCO). This noise power is translated as the high

frequency in-band phase noise at the output of the PLL. Our circuit contains

it robust with respect to process variations.

generator and efficient output analysis. The proposed analysis method is

an alternative to histogram based analysis techniques to provide test time

improvements, especially when the resources are scarce. In addition to the

(INL), non-monotonic behavior of the ADC can also be detected with the

proposed technique. The proposed ramp generator has a high linearity

In the proposed system level test methods, we utilize the loop-back

configuration to eliminate the need for an RF instrument. The first loop-back

test method, which is proposed for wafer level test of direct conversion

transceivers, targets catastrophic and large parametric faults. The use of

intermediate frequencies (IF) generates a frequency offset between the transmit

and receive paths and prevents a direct loop-back connection. We overcome this

problem by expanding the signal bandwidth through saturating the receive path

composed of low noise amplifier (LNA) and mixer. Once the dynamic range of the

receiver path is determined, complete transceiver can be tested for catastrophic

The impact of impairments, such as transmitter receiver in-phase/quadrature

use only transmitter and receiver baseband signals for test analysis. The

used to extract impairment and nonlinearity parameters separately with the

of loop-back and multi-site test approaches. In this test method, we present

a 2x-site test solution for RF transceivers. We perform all operations on

under the normal operating conditions. The transmitter on one device under

path. Parameters of the two devices are decoupled from one another by carefully

modeling the system into a known format and using signal processing techniques.