Heterogeneity in the Effectiveness of Non-pharmaceutical Interventions During the First SARS-CoV2 Wave in the United States. 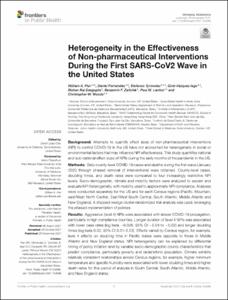 Professor of Medicine
I am interested in the spatial epidemiology of infectious diseases. My research utilizes geographic information systems (GIS) and geostatistical analyses to understand the spatial and spatiotemporal distribution of diseases, and their relationship with environmental and demographic factors. I currently have active studies evaluating the spatial distribution of numerous domestic and international infectious diseases, including SARS-CoV-2 (COVID-19), cytomegalovirus, influenza, and Lyme disease. A Elizabeth Brooks Reid and Whitelaw Reid Associate Professor
William Pan, PhD, Assistant Professor of Global Environmental Health, joined the faculty at Duke in 2011. He holds a joint appointment at DGHI and the Nicholas School of Environment, and is Adjunct Assistant Professor in the Department of International Health at Johns Hopkins Bloomberg School of Public Health. Pan’s research interests focuses on Population, Health, and Environmental interactions in developing countries, with particular interest in translational research directed toward sus