The Effect of Social Isolation on Adolescents During COVID-19 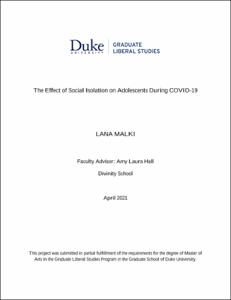 View / Download
1.0 Mb
Date
Author
Malki, Lana
Advisor
Hall, Amy Laura
Repository Usage Stats
69
views
145
downloads
Abstract
My initial hypothesis was that adolescents may carry into adulthood the potential residual effects of social isolation on behavioral changes. To draw a holistic picture of the situation at hand, I went on a quest through different disciplines to test my hypothesis's credibility. First, I examined historical events by following adolescents who lived in similar circumstances. I was looking for helpful trajectories that can be implemented in the current situation to detect any common behavioral patterns. Unable to find a satisfying answer, I have come, through this research, to realize that the question I was asking is complicated and not readily open to historical comparison. By visiting the neurodevelopmental literature, I learned that social isolation could cause a hormonal and neurological imbalance that may shift from a goal-oriented to a habit-like behavior. Equipped with this knowledge, I ventured next into the world of psychology. I aimed to learn from human development theories and to draw a trajectory of the potential long-term damage on the cohort in question. With the abundance of information, I worked on testing and adapting my initial hypothesis. This took me also, inevitably, into issues related to the context where adolescents would normally reside for much of their day: school. I also realized that my interdisciplinary quest was missing a significant factor: social media. I started my research on social media expecting to confirm the negative effect of long hours of exposure to social media, only to be pulled into a complicated, potentially helpful, and useful virtual world that I barely knew. I realized that I could not apply my knowledge as an adult to the age group in question because, practically, many of them are living through the pandemic in a different world: the virtual world.
Type
Capstone project
Department
Graduate Liberal Studies
Permalink
https://hdl.handle.net/10161/24208
Citation
Malki, Lana (2021). The Effect of Social Isolation on Adolescents During COVID-19. Capstone project, Duke University. Retrieved from https://hdl.handle.net/10161/24208.
Collections
More Info
Show full item record