Reduction in Mortality after Umbilical Cord Blood Transplantation in Children Over a 20-Year Period (1995-2014). 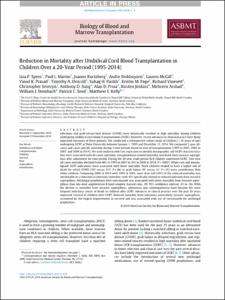 Associate Professor of Pediatrics
My research is broadly focused on elucidating the complex interactions that exist between the host microbiome and exogenous pathogens that cause infections in children. We have several ongoing projects evaluating: 1) the impact of the upper respiratory microbiome on the risk of colonization and invasion by bacterial respiratory pathogens among infants in Botswana; 2) associations between the gut microbiome of pediatric stem cell transplant recipients and the risk of infections (bloodstream infec Jerome S. Harris Distinguished Professor of Pediatrics
Dr. Kurtzberg conducts both clinical and laboratory-based translational research efforts, all involving various aspects of normal and malignant hematopoiesis. In the laboratory, her early work focused on studies determining the mechanisms that regulate the choice between the various pathways of differentiation available to the pluripotent hematopoietic stem cell. Her laboratory established a CD7+ cell line, DU.528, capable of multilineage differentiation as well as self-renewal, and subse Professor of Pediatrics
For most of my career in Pediatric Hematology/Oncology I have focused on the use of stem cell transplant for the treatment of pediatric leukemias (ALL, AML, CML and JMML) and other non-malignant blood disorders, such as sickle cell disease, hemaphagocytic disorders, Wiskott-Aldrich, aplastic anemia, Diamond-Blackfan Anemia, as well as inherited metabolic diseases. In addition to focusing on determining the best use of stem cell transplants for these disorders, I have also been involved in clinic Assistant Professor of Pediatrics
Stem cell transplantation and/or cellular therapies can be used to treat a variety of pediatric diseases including malignancies such as leukemia, lymphoma and myelodysplastic syndrome in addition to certain non-malignant conditions (such as immune deficiencies, inherited metabolic diseases, hemoglobinopathies, and bone marrow failure syndromes). As the Director of the Pediatric Transplant and Cellular Therapy Survivorship Clinic, my goal is optimize the care of survivors of pediatric stem cell t Associate Professor of Pediatrics
Stem cell transplantation for a variety of disorders - ranging from malignant diseases such as leukemia, lymphoma and myelodysplastic syndrome to nonmalignant diseases such as sickle cell disease, thalassemias, aplastic anemia, histiocytosis and leukodystrophies. My clinical research interest is stem cell transplantation for children with primary immune deficiency disorders and hemoglobinopathies such as sickle cell anemia,thalassemia and other non-malignant disorders. In addition,I am intereste Professor of Pediatrics
1. Expanding the role of umbilical cord blood transplants for inherited metabolic disorders. 2. Impact of histocompatibility and other determinants of alloreactivity on clinical outcomes of unrelated cord blood transplants. 3. Studies to analyse the impact of Killer Immunoglobulin receptors on the outcomes of hematopoietic stem cell transplantation utilizing haploidentical, CD34 selected, familial grafts. 4. Propective longitudinal study of serial monitoring of adenovirus in Professor of Pathology
My research interests are focused on the pathology and genesis of diseases affecting the eye and adjacent structures.

Associate Professor of Pediatrics
We are studying human microbial ecology and the molecular basis for different bacterial infections that are of relevance to both children and adults. Summaries of the research areas are described below: 1. THE MOLECULAR BASIS FOR VIRULENCE OF UROPATHOGENIC ESCHERICHIA COLI AND URINARY TRACT INFECTIONS. Uropathogenic Escherichia coli (UPEC) is the leading cause of community-acquired urinary tract infections (UTIs). Over 100 million UTIs occur annually throughout the world inclu Samuel L. Katz Distinguished Professor of Pediatrics
My overall clinical and research focus is to improve the diagnosis, treatment, and outcomes of immunocompromised patients, specifically those with invasive fungal infections.  My research enterprise is divided between my basic, translational, and clinical approaches.  My laboratory focuses on the molecular pathogenesis of Aspergillus fumigatus, a leading invasive fungal killer, and the development of novel antifungal drugs and diagnostic assays.  I also oversee numerous translatio
This author no longer has a Scholars@Duke profile, so the information shown here reflects their Duke status at the time this item was deposited. Associate Professor of Medicine
I am dedicated to the treatment of hematologic malignancies through cellular therapies such as hematopoietic stem cell transplantation (HCT). My research focuses on strategies to reduce complications of HCT and ranges from preclinical studies using murine models of HCT to Phase 1 and Phase 2 clinical trials. Areas of interest include the role of the microbiota (the trillions of bacteria living in and on our bodies), nutrition, and exercise in modulating HCT outcomes such as graft-versus-host
More Authors
Alphabetical list of authors with Scholars@Duke profiles.