Religious Conviction, Respect, and the Doctrine of Restraint in the Exclusionist-Inclusionist Debate 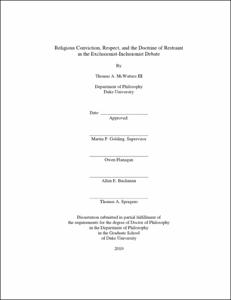 The principle of respect for other persons is commonly invoked in contemporary liberalism as justification for the claim that a conscientious citizen in a liberal democracy is morally obligated to refrain from supporting a coercive law for which he lacks suitable public justification. This view has been challenged by Christopher Eberle in <italics>Religious Conviction in Liberal Politics</italics>, who argues that although a citizen has an obligation to pursue a convincing secular rationale for a coercive law, he does not have an obligation to withhold support for a law for which he lacks such a rationale.

The framework I propose views respect for persons as a complex and variegated concept. It separately considers four different forms or notions of respect, and takes the attitude of respect as foundational and prior to the other forms of respect. I conclude that any conception of respect will entail commitment to a broader ethical theory or set of ethical principles. Accordingly, in the final chapter, I suggest that Robert Audi's "value-based Kantian intuitionism," with its emphasis on respect and the dignity of persons as a grounding property, may constitute an auspicious ethical theory to which appeal may plausibly be made in completing a conception of respect.