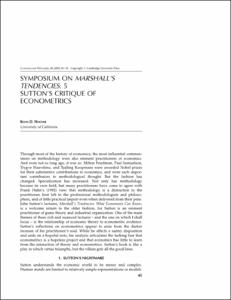 View / Download
81.9 Kb
Date
Author
Hoover, Kevin Douglas
Repository Usage Stats
337
views
410
downloads
Abstract
Through most of the history of economics, the most influential commentators on methodology were also eminent practitioners of economics. And even not so long ago, it was so. Milton Friedman, Paul Samuelson, Trygve Haavelmo, and Tjalling Koopmans were awarded Nobel prizes for their substantive contributions to economics, and were each important contributors to methodological thought. But the fashion has changed. Specialization has increased. Not only has methodology become its own field, but many practitioners have come to agree with Frank Hahn's (1992) view that methodology is a distraction to the practitioner, best left to the professional methodologists and philosophers, and of little practical import even when delivered from their pens. John Sutton's lectures, Marshall's Tendencies: What Economists Can Know, is a welcome return to the older fashion, for Sutton is an eminent practitioner of game theory and industrial organization. One of the main themes of these rich and nuanced lectures ± and the one on which I shall focus ± is the relationship of economic theory to econometric evidence. Sutton's reflections on econometrics appear to arise from the darker recesses of his practitioner's soul. While he affects a sunny disposition and ends on a hopeful note, his analysis articulates the lurking fear that econometrics is a hopeless project and that economics has little to learn from the interaction of theory and econometrics. Sutton's book is like a play in which virtue triumphs, but the villain gets all the good lines.
Type
Journal article
Subject
ECONOMETRICS
econometric theory
Permalink
https://hdl.handle.net/10161/2556
Collections
More Info
Show full item record