The Noxious Influence of Authority: A Correction of Jevons' Charge 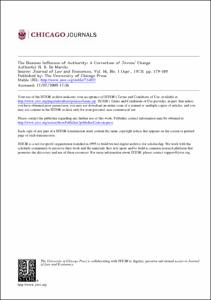 View / Download
1.2 Mb
Date
Author
De, Marchi Neil
Repository Usage Stats
274
views
716
downloads
Abstract
Jevons’ well-known protest in the 1870's against the 'despotic calm' induced by the dominance of 'the orthodox Ricardian school' in British political econ-omy, comprised two distinct allegations. One was that the writings of John Stuart Mill and some of his disciples were so widely and so exclusively used in the University study of the subject as to constitute a barrier against free en-quiry.1 The second was that this was in no small measure due to the deliberate politicking of a 'Mill faction' which 'never scrupled at putting their lecturers and examiners wherever they could'.2 The role of authority in the development of British economics has been discussed by Professor A. W. Coats in a recent article of that title, in the Journal of Law and Economics. Coats lists among the reasons for the stagnant condition of British economics in 1871 'a restrictive academic power structure'.3 There is undoubtedly some truth in this suggestion, especially as applied to the Universities of Oxford and Cam-bridge, where religious tests excluded from Professorial posts all but members of the Established Church.4 But just how far a restrictive academic power structure was present as a factor capable of stultifying the development of the science has not been defined. An examination of Jevons' charges requires data which throw some light on this issue. However, the first purpose of this note is to offer a partial test of Jevons' second allegation, through an enquiry into the behavior of Mill and his followers in relation to elections to chairs in political economy in England, Ireland and Scotland during the period 1848 to 1873.5 It will be argued that while Jevons' first allegation is un-deniable, his second will not bear close inspection.
Type
Journal article
Subject
Jevon
orthodox ricardian school
Permalink
https://hdl.handle.net/10161/2593
http://www.jstor.org/stable/724832
Citation
De Marchi, Neil. The Noxious Influence of Authority: A Correction of Jevons' Charge. Journal of Law and Economics. 16.1 (April 1973): 179-189. Print.
Collections
More Info
Show full item record