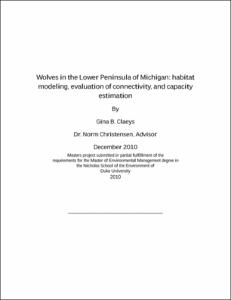 View / Download
1.3 Mb
Date
Author
Claeys, Gina
Advisor
Christensen, Norm
Repository Usage Stats
595
views
1,805
downloads
Abstract
Gray wolf populations have been rebounding in the Great Lakes region, after being nearly extirpated from the conterminous United States. Breeding populations of wolves have established in the Upper Peninsula of Michigan but have not yet become widely established in the Lower Peninsula (LP) of Michigan, despite several sightings of wolves in the LP since 2004. The objective of this analysis was to determine the quantity of potential habitat for wolves in the LP using wolf occurrence data obtained by radio telemetry, Maxent software, and ArcGIS. The habitat model was evaluated to determine if the potential habitat could support a viable population. A species distribution model (SDM) was created in Maxent and analyzed in ArcGIS to estimate the amount of potential habitat for wolves in the LP. Connectivity of potential habitat was evaluated by looking at least cost paths, corridors, and potential dispersal land. I found that there is 2,674-3,246 km2 of potential habitat in the LP, which could support 52-63 wolves. This is below the minimum of 100 necessary to sustain a viable population. All habitat patches at least 50 km2 in size are in the northern LP, but are not connected by land suitable for dispersal. Thus, although there are habitat patches of sufficient size in lower Michigan, it is likely that packs of wolves that may inhabit these patches will remain relatively isolated and have difficulties dispersing throughout lower Michigan. It is unlikely that they will be able to inhabit or disperse through the southern LP without land management geared towards creating larger unfragmented habitat patches and suitable dispersal corridors. This analysis highlights the need for land management geared towards wolves in order to allow them to continue to recover their former range in the United States.
Type
Master's project
Department
Nicholas School of the Environment and Earth Sciences
Subject
wolves
GIS
Maxent
habitat modeling
conservation planning
Permalink
https://hdl.handle.net/10161/2858
Citation
Claeys, Gina (2010). Wolves in lower Michigan: habitat modeling and capacity estimation. Master's project, Duke University. Retrieved from https://hdl.handle.net/10161/2858.
Collections
More Info
Show full item record