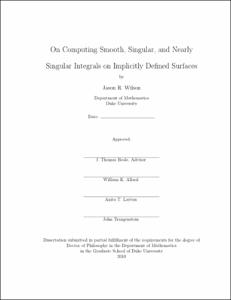 We present numerical methods for the approximation of smooth, singular, and nearly singular integrals on implicitly defined surfaces. We begin with a high-order quadrature formula for an integral over a compact smooth implicitly defined hypersurface. Our high-order formula is novel in that it has spectral convergence but does not require a set of overlapping patches. Rather, certain hypersurface points, called quadrature points, must be determined. To find the quadrature points, we search for certain line segments, called brackets, for which the level set function has a sign change at the endpoints. We show that as the segment spacing tends to zero, that each quadrature point must be eventually contained in exactly one bracket. To find the quadrature point within a bracket we use standard one dimensional root finding techniques. Next, we show how to accelerate the process of finding the brackets by restricting the line segment search to cells that are near the hypersurface. Finally, we give an optimal algorithm for finding the quadrature points that has an observed runtime proportional to the number of quadrature points. The high-order convergence of our new quadrature formula is demonstrated numerically on a number of complex implicitly defined surfaces and smooth integrands. Using standard interpolation and finite differencing techniques, we show how to achieve high-order accuracy in the case where the level-set function and integrand are only known at regularly spaced grid points.

We next address the problem of computing double layer and single layer potentials. By using a locally flat cutoff function, we decompose the layer potential into a global part and a local part. We numerically verify that our new quadrature formula has high-order convergence when applied to the global part of a singular double layer potential by computing Gauss's integral on a number of complex implicitly defined surfaces. For the local part, we focus on the single layer potential. In particular, we give a constant runtime complexity algorithm for evaluating the local part of a single layer potential for both the singular and nearly singular cases. To compute the local part, we write the integral in certain local polar coordinates and consider the angular and radial parts separately. We first prove that the angular part can be approximated to high order using the trapezoid rule. In particular, we show that due to our choice of local coordinates, the integrand of the angular part is well approximated by a low degree trigonometric polynomial which is integrated exactly by the trapezoid rule with a small number of quadrature points. We next show that by multiplying the radial integrands by certain helper functions and using a change of variable, the radial integrals can be written in terms of standard integrals that can be precomputed and stored in a lookup table. We demonstrate the high-order convergence of our constant runtime local single layer potential integration method with a number of numerical examples on complex implicitly defined surfaces.